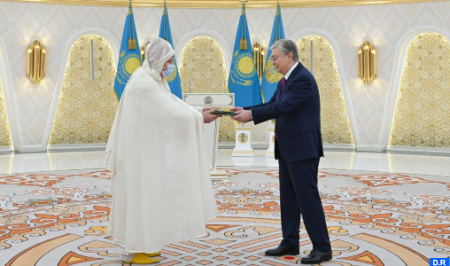 Morocco’s ambassador to Kazakhstan, Mohammed Rashid Maaninou, handed, Monday in Nur-Sultan, his credentials to the President of the Republic of Kazakhstan, Kassym-Jomart Tokayev. During this audience, President Tokayev stressed that the development of cooperation with Morocco is one of the priorities of Kazakhstan’s strategy in Africa, recalling that the two countries are celebrating the thirtieth anniversary of the establishment of their diplomatic relations. The Kazakh President also expressed his country’s willingness to cooperate with Morocco in the implementation of investment initiatives and the development of bilateral trade. For his part, the Moroccan diplomat voiced his determination to work in accordance with the High Royal Instructions to raise the cooperative relations between the Kingdom and the Republic of Kazakhstan to the highest level.