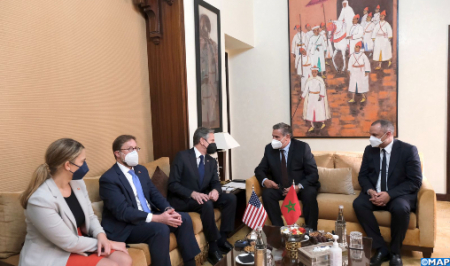 Head of Government, Aziz Akhannouch, held talks on Tuesday in Rabat with the U.S. Secretary of State, Antony Blinken, who is currently on a working visit to Morocco. These talks took place in the presence of the minister of Industry and Trade, Ryad Mezzour, the minister Delegate in charge of Relations with Parliament, government spokesperson, Mustapha Baitas, as well as the Director General of the Millennium Challenge Account-Morocco Agency (MCA-Morocco), Malika Laasri, says a statement by the Department of the Head of Government. The meeting was an opportunity to reaffirm the quality of the long-standing friendly relations between the Kingdom of Morocco and the United States of America. During this meeting, the two sides expressed their willingness to continue cooperation on issues of common interest related to various political and economic aspects, the statement notes. They also discussed the international situation and reviewed the challenges facing the global economic recovery in order to emerge from the repercussions of the COVID-19 pandemic, particularly in the wake of the surge in commodity prices in the world and continued disruptions in some supply chains. In addition, the two sides discussed the prospects for developing trade and encouraging investment initiatives, the statement said. In this regard, Mr. Akhannouch welcomed the positive dynamic that marks the strategic partnership between Morocco and the United States, expressing his desire to raise it to the level of the aspirations of the two countries. The head of government also underlined that the Kingdom has begun to implement a set of strategies and structuring projects, under the leadership of HM King Mohammed VI, noting that the government has put in place a series of measures to mitigate the repercussions of the COVID-19 pandemic, stimulate private investment and achieve economic recovery. On the other hand, Mr. Akhannouch assured that Morocco continues to implement its various commitments relating to the Millennium Challenge Program, signed between the Government of Morocco and its American counterpart, represented by the Millennium Challenge Corporation, while welcoming the remarkable achievements recorded in the implementation of the various projects covered by the cooperation program (Compact II).