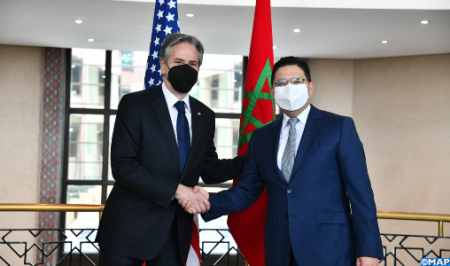 Morocco-U.S. relations are based on a solid, ambitious and multi-faceted partnership, in accordance with HM King Mohammed VI’s farsighted vision, said Nasser Bourita, Minister of Foreign Affairs, African Cooperation and Moroccans Abroad, Tuesday in Rabat. Speaking at a joint press conference with the U.S. Secretary of State, Antony Blinken, at the end of their talks, Bourita said that relations between the two countries are also based on the personal relationship between HM the King and the U.S. President, Joe Biden, since their meeting in 2016 in Marrakech. Referring to some aspects of this partnership between the two countries, Bourita mentioned the international coalition against Daesh and the joint efforts to fight terrorism and extremism, the African Lion joint military maneuvers scheduled for next June, and the organization of the African-American Economic Forum scheduled in July in Marrakech, denoting the richness and diversity of this partnership. Bourita further noted that relations between Morocco and the United States transcend the bilateral framework to encompass the Middle East and Africa as well as other regions in the world, adding that the Morocco-U.S. partnership is based on common values and interests as well as a convergent vision on a set of international and regional issues. He stressed, in this regard, the strong desire of HM the King for the development of relations within the framework of multiple mechanisms available to both countries, citing, the strategic dialogue initiated two weeks ago as well as the dialogue on human rights, in addition to the free trade agreement, the only instrument of its kind between an African country and the United States, and which has boosted bilateral economic relations. Expressing the hope that this agreement can contribute to the promotion of U.S. investment in Morocco, Bourita also referred to the importance of the charter on the Millennium Development Goals in the development of the Kingdom and the solid mechanisms of security and military cooperation carrying many initiatives between Morocco and the United States. In this regard, Bourita expressed the ambition of Morocco that this bilateral partnership will be exemplary and solid in view of its historical roots and its ability to be in line with the challenges on the international and regional scenes. He also welcomed the presence of the United States as a party in the tripartite agreement signed in December 2020 before His Majesty the King, which sealed the resumption of relations between Morocco and Israel, noting the positive results of this agreement called to strengthen further in support of concrete and promising projects for the peoples of the region, particularly Morocco’s and Israel’s. Bourita said, on this occasion, that the talks with Blinken focused on the Morocco-U.S. partnership in Africa in the face of potential challenges and the exploitation of immense opportunities offered in the economic, trade, climate, infrastructure, health and security areas, ensuring that the African continent is a space conducive to bilateral cooperation. He emphasized the importance of Blinken’s visit to Morocco, which illustrates the strength of this partnership and the potential that must be exploited in this context for the benefit of the interests of both countries and both peoples, in addition to security, stability and development in regions that are the subject of a strong interest.