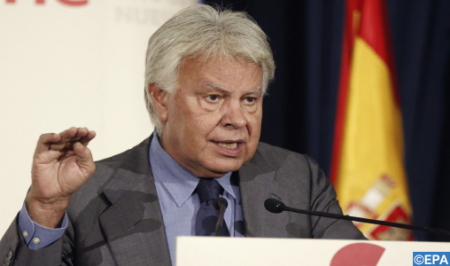 Former President of the Spanish Government, Felipe González, has reaffirmed in New York that the Moroccan autonomy plan is “the best solution” to achieve a final settlement of the regional dispute over the Sahara. “It is the most serious and realistic solution that has been presented for more than forty years,” González told reporters at an award ceremony of the Queen Sofia Spanish Institute, held Thursday. The former head of the Spanish government (1982-1996) who attended this event, chaired by Queen Sofia, in the presence of several high-profile personalities, reiterated his full support for his country’s new stance in support of the solution of autonomy proposed by Morocco to put an end to this artificial conflict. Prior to a recent conference on relations between Europe and Latin America and the Caribbean, Mr. González said that the Moroccan autonomy initiative, supported by Madrid, is “the only proposal with a viable outcome”. In a message sent to HM King Mohammed VI, the President of the Spanish Government, Pedro Sánchez, underlined that Spain considers the Moroccan Autonomy Initiative as the most serious, realistic and credible basis for the resolution of the dispute over the Moroccan Sahara.