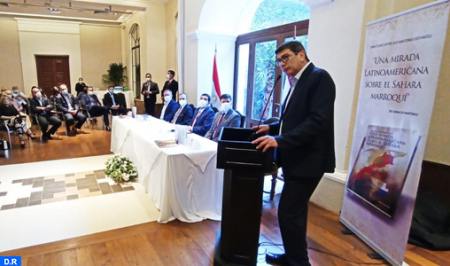 Latin American countries are called upon to express their “solidarity” with Morocco and to work for a “final settlement” at the level of the United Nations Security Council in favor of the Moroccanness of the Sahara, says Colombian newspaper “Primicia Diario”. “The conditions are met for Latin America to be an effective spokesperson in the protection and affirmation of the right of a peaceful people to remain united territorially, culturally and to maintain their national identity”, underlines Paraguayan journalist and writer Ignacio Martinez in an op-ed. The expert in Maghreb affairs notes that Latin America “must support dialogue, thus protecting regional security, which is essential for the security of Africa and Europe”. The Spanish government has already expressed its support for Morocco’s position, as the promoter of the best final solution to this regional dispute, he recalls. Latin America is a strong voice at the global level as a continent committed to peace, says the author of the book “A Latin American Look into the Moroccan Sahara”, believing that “the world must be aware that violence has a domino effect that ends up harming citizens everywhere.” According to Mr. Ignacio Martinez, “the impact of what is happening between Ukraine and Russia is being felt. This confrontation should call for reflection on the harmfulness of any space that incites pain, blood and death “, as is the case for the instigators of the conflict in the Maghreb region. The ties of “fraternity between Latin America and Morocco” are an “act of justice”, notes the daily publication, adding that “the other major step to further strengthen the relationship will be to give concrete form to support for the Kingdom, including through the opening of consulates in the south of Morocco.” The presence of Moroccan diplomacy in almost all Latin American countries is “a strategic point to unite the wills and efforts against the violence of the Polisario and its Algerian sponsor, who are betting uselessly on the violation of rights”. The sincere relations between the peoples of Latin America and Morocco “must be strengthened at the levels of culture, commerce and any exchange that contributes to the collective good. All this comes in abundance as added value in this legitimate commitment for the Moroccan Sahara,” the publication concludes.