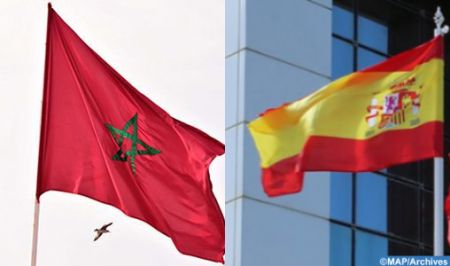 Morocco and Spain intend to establish a sustainable and ambitious roadmap, which includes several elements affecting the different aspects of their bilateral cooperation. “The visit to Morocco of the President of the Spanish Government is an important moment to consolidate this roadmap and define the priorities of the next High Level Meeting (HLM), to be held before the end of the year,” said Thursday, the Morocco-Spain joint statement. On this basis, the new roadmap includes several elements, added the statement, which was adopted after extensive discussions between HM King Mohammed VI and the President of the Spanish Government, Pedro Sanchez, who is on an official visit to the Kingdom at the invitation of the Sovereign. Thus, issues of common interest will be dealt with in a spirit of trust, in consultation, far from unilateral acts or faits accomplis, the statement noted, adding that the full normalization of the movement of people and goods will be restored in an orderly manner, including appropriate arrangements for customs control and people at land and sea. Among the elements that will be included in the roadmap, there is the immediate restoration of maritime passenger links between the two countries and gradually until the opening of all frequencies. Preparations for the operation Paso del Estrecho / Marhaba will be initiated in this same perspective, added the same source. Similarly, the working group on the delimitation of maritime spaces in the Atlantic seaboard will be reactivated, with the aim of making concrete progress, while discussions on airspace management will be initiated. Cooperation in the field of migration will also be relaunched and strengthened, according to the joint statement, which stated that the Permanent Spanish-Moroccan Group on Migration will meet soon. In addition, coordination within the framework of the respective presidencies of the Rabat process, during the period 2022-2023, will be conducted in such a way as to highlight the exemplary cooperation between the two countries in this field, in favor of a comprehensive and balanced approach to the phenomenon of migration, while sectoral cooperation will be reactivated in all areas of common interest: economic, commercial, energy, industrial and cultural, among others, the same source added. The elements of the roadmap also include an upcoming meeting on the facilitation of economic exchanges and links between the two countries and the priority that will be given in this new stage to the field of education, vocational training and higher education. A specific working group will be established for this purpose. Cultural cooperation will be strengthened. Within this framework, the joint statement added, a sectoral working group in the field of Culture and Sports will be established. A new impetus will be given to the Board of Directors of the Three Cultures Foundation. The activity reports of the meetings and working groups established or reactivated will be presented at the High Level Meeting, said the same source, which noted that the two countries will begin exchanges on the updating of the Treaty of Good Neighborliness, Friendship and Cooperation of 1991, based on the principles, parameters and priorities that should guide their bilateral relations in the years to come. “His Majesty King Mohammed VI and the President of the Spanish Government, H.E. Pedro Sánchez, will appoint a committee in charge of the implementation of this statement, within 3 months”, concluded the joint statement.