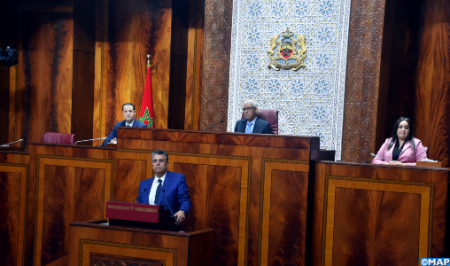 The House of Representatives (lower house) unanimously adopted, on Monday, at second reading, bill n° 95.17 relating to arbitration and conventional mediation. This legislative text comes in application of royal instructions regarding the comprehensive and in-depth reform of the judicial system, with a view to developing alternative judicial methods such as mediation, arbitration and conciliation, said minister of Justice, Abdellatif Ouahbi, who presented this bill before the House of Representatives. This bill includes three chapters relating in particular to national mediation, international mediation and conventional mediation, Mr. Ouahbi added, noting that some countries oblige by the force of the law the recourse to mediation whereas arbitration includes generally three judges, one is chosen by the two parties while the third one is appointed by mutual agreement of the parties or at the request of the president of the court. He stressed in this regard that the bill was the subject in the first reading in the House of Representatives of 337 amendments of which 203 were accepted, and of 160 amendments at the House of Advisors (upper house) of which 108 were accepted. The text was approved by both Houses of Parliament unanimously, he observed, noting that the Ministry of Justice interacted positively with all the proposed amendments before the text was submitted to the House of representatives for second reading. The minister underlined that this bill will allow businessmen, companies and individuals to save time and find solutions to their problems, while exempting the judiciary from many files that can be solved while using mediation or arbitration.