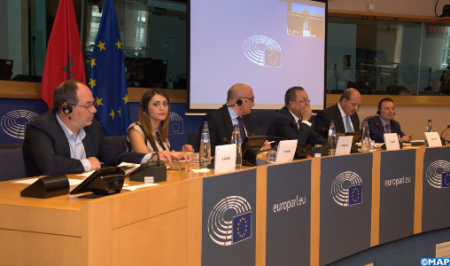 Morocco is determined to continue developing its partnership with the European Union, said Thursday in Brussels, Speaker of the House of Advisors (upper house), Naama Mayara. Relations between Morocco and the EU have experienced a sustained development thanks to the proactive democratic reforms initiated by HM King Mohammed VI and the actions of legislative and regulatory approximation in the political, economic, financial, and human fields,” he said at the opening of the 11th meeting of the Morocco-EU Joint Parliamentary Committee (JPC). The path taken has made the Kingdom a unique model of democratic development and a leading partner in the region, Mayara stated. Stressing the multifaceted partnership between Morocco and the EU, the Speaker of the House of Advisor mentioned renewable energy, migration policy, South-South cooperation, the fight against extremism and terrorism as well as the promotion of peace and security in the world. In his opinion, the JPC provides a framework for dialogue and consultation on issues of common interest and is an advanced mechanism to support cooperation and partnership between the Kingdom and the EU. On the sidelines of his participation in the JPC meeting, Mayara met with the European Parliament President Roberta Metsola, the EP Vice-President, Pina Picierno, the co-chair of the EU-Morocco JPC, Andrea Cozzolino, the chairman of the Identity and Democracy Group in the EP, Marco Zanni, and MEP Andrey Kovachev. The talks focused on ways to strengthen the partnership between Morocco and the EU.