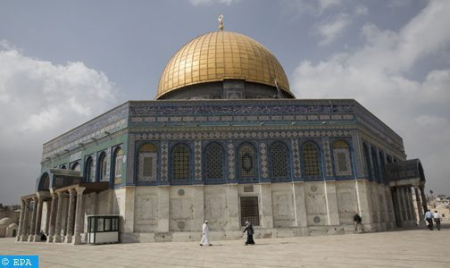 Bahrain has highlighted Morocco’s efforts, under the leadership of His Majesty King Mohammed VI, to defend the Palestinian cause and preserve the identity of Al-Quds Al-Sharif. In a speech delivered Tuesday during a solidarity meeting with the Palestinian people, Ahmed Mohammed Al-Tarifi, head of the Arab Affairs Division at the Bahraini Foreign Ministry, voiced his country’s gratitude for the role of the Al-Quds Committee chaired by His Majesty King Mohammed VI, in preserving the Arab Islamic and Christian identity of Al-Quds and ensuring the freedom to practice religious rites for all in peace and tranquility. During this meeting, held by the Embassy of the State of Palestine in Manama, Al-Tarifi affirmed his country’s commitment to supporting the Palestinian people to obtain their legitimate and inalienable rights to self-determination, to return to its lands and to establish its independent state on its national territory as a strategic option to achieve a just and comprehensive peace in the Middle East.  He also called on the international community to shoulder its political and legal responsibilities and to open serious horizons to the process of just and comprehensive peace on the basis of the principle of the two-state solution and the Arab Peace Initiative The diplomat stressed the legitimate rights of the Palestinian people to establish their independent and sovereign state within the borders of June 4, 1967, with East Jerusalem as its capital, on the basis of the principle of the two-state solution and in accordance with the principles of international law, the Arab Peace Initiative, and the resolutions of international legitimacy relating thereto. He also referred to Bahrain’s support to the efforts of the State of Palestine to become a full member of the United Nations, strengthen its legal and international status and embody its independence and sovereignty over its territory.  The event was held in the presence of several diplomats accredited in Manama, including Morocco’s Ambassador, Mustafa Benkhayi.