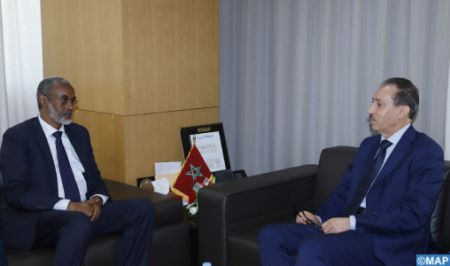 The Moroccan experience in the field of justice was at the heart of talks Monday in Rabat between the public prosecutor at the Court of Cassation, President of the Public Prosecutor’s Office, El Hassan Daki, and Djibouti’s Minister of Justice, Ali Hassan Bahdon. In a statement to the press at the end of these talks, Daki said he presented to the minister and the delegation accompanying him, Morocco’s experience including the independence of the judiciary and the presidency of the Public Prosecutor’s Office. The meeting was an opportunity to explore opportunities to strengthen bilateral cooperation in the judicial field, he said. These talks were also an opportunity to learn about Djibouti’s experience in the field of judicial administration, Daki added, noting that the proliferation of cross-border crime requires stronger cooperation between states to ensure security and stability. For his part, Bahdon said that his visit to Morocco aims to strengthen the strong partnership between the two countries in the field of justice, welcoming the “important support” that the Kingdom provides to his country in this area. Morocco and Djibouti share common values, traditions and culture in addition to many other points of convergence that must be used to serve the peoples of both countries, he stressed. Earlier in the day, the Minister of Justice of Djibouti had talks with Moroccan counterpart Abdellatif Ouahbi on ways to strengthen bilateral judicial cooperation.