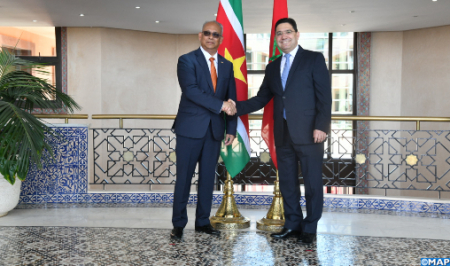 The Kingdom of Morocco and the Republic of Suriname, on Wednesday, their high appraisal of the current level of bilateral relations in all areas, in a joint communiqué issued after talks between the Minister of Foreign Affairs, African Cooperation and Moroccans Abroad, Nasser Bourita and the Minister of Foreign Affairs, International Trade and International Cooperation of Suriname, Albert Ramdin. During this meeting, the two ministers discussed a broad range of issues relating to state and prospects of further expansion of cooperation between the Kingdom of Morocco and the Republic of Suriname to meet the aspirations and respective ambitions of the governments of the two friendly countries, the statement added. In this context, Bourita and Ramdin expressed their willingness to further deepen and consolidate bilateral cooperation through the exchange of experience and expertise in different fields of common interest. In addition, the two ministers discussed a range of international and multilateral issues and agreed to continue political consultations between the two countries and coordinate their positions at the multilateral level in international and regional fora. They also agreed to coordinate their action to promote regional cooperation between African and Caribbean countries, it says. It is within this spirit that the Kingdom of Morocco and the Republic of Suriname proceeded, in March 2021, to the adoption of the Roadmap of Cooperation for the period 2021-2024 to further boost the positive ongoing dynamic relationship and reinforce the already existing ties between the two countries. The establishment of this framework was inspired by the success story of the Roadmap initiative led by Morocco in the Caribbean region, notes the same source, revealing that the two ministers expressed their deep satisfaction with this Roadmap Agreement as well as their firm commitment to its implementation. In this spirit, the Government of the Republic of Suriname has opened an embassy in Rabat to give a new dynamic and strengthen bilateral cooperation.