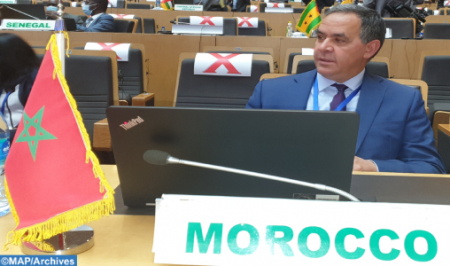 Morocco’s experience in the fight against terrorism emanates from the Kingdom’s firm commitment to the prosperity and welfare of the African citizen, Ambassador Mohamed Arrouchi, Morocco’s Permanent Representative to the African Union and the UNECA, said on Wednesday in Malabo, Equatorial Guinea. Arrouchi, who leads the Moroccan delegation to the work of the Executive Council of the African Union, preparatory to the Extraordinary Summits on humanitarian issues, the fight against terrorism and anti-constitutional changes of government in Africa, scheduled Friday and Saturday in Malabo, noted that the many challenges facing the African continent, including underdevelopment, poverty, emigration, wars and conflicts, push young people into the arms of extremist and terrorist groups and radicals who do everything possible to get these young people to join them and attack societies imbued with the values of freedom, openness and tolerance. The expansion of the jihadist ideology is a great challenge for Africa, especially in the Sahel and other regions of the continent and this, following the defeat of Al-Qaeda in Afghanistan and Daesh in Iraq and the Levant, Arrouchi noted, adding that the combination of this ideology with regional conflicts and tensions that prevail in the continent, is exploited by separatist movements. The Moroccan diplomat also warned against the proliferation of terrorism and its increasingly proven interdependence with separatist movements in Africa, stressing the need to take in consideration the unbreakable link between security and stability internally and externally. Referring to the actions undertaken by Morocco in the fight against terrorism, Arrouchi highlighted the proactive, practical and pragmatic multidimensional Moroccan approach taking into account legal and security, religious and socio-economic aspects. On the legal level, Morocco adopted its first counter-terrorism law in 2003, which was subsequently amended in 2011 and 2015 to harmonize it with international conventions, the Ambassador pointed out. At the security level, Morocco has strengthened internal security measures by creating the Hadar plan in 2014 and the Central Bureau of Judicial Investigations (BCIJ) in 2015, with the objective to confront the challenges of terrorism, he stressed. Regarding the religious side, Morocco has adopted a unique religious reform to rebuild the religious field, Arrouchi said, mentioning, in this regard, the creation of the Mohammed VI Institute for the Training of Imams, Murchidates and Murchidines which receives students from Morocco and Africa, in addition to the the Mohammed VI Foundation for African Ulemas seeking to promote moderate Islam and religious tolerance and ensure the spiritual security of Moroccans and Africans. Among the efforts to promote moderate Islam against violent extremism in Africa, Morocco has initiated a training program for Imams from Mali, Libya, Tunisia, Ivory Coast, Gabon, Guinea, the Maldives and Nigeria, the Moroccan diplomat added.