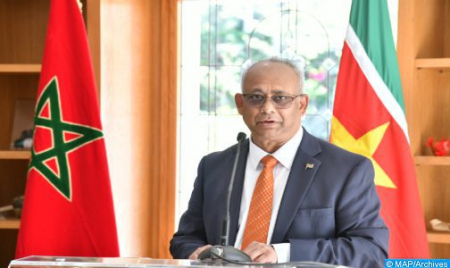 The Minister of Foreign Affairs, International Business and Cooperation of the Republic of Suriname, Albert Ramdin, said Thursday that the opening of a consulate general of his country in Dakhla gives a strong impetus to bilateral cooperation in several areas. “This consulate offers the opportunity to boost our relations from the political point of view and in terms of economic, social and cultural cooperation,” Ramdin said in a statement to the press after the opening of this diplomatic antenna in Dakhla. “Our ambition is to strengthen our presence in Dakhla to create opportunities for the private sector in both countries,” he stated, stressing the need to strengthen relations with Morocco on solid grounds of friendship and mutual commitment. Ramdin also expressed his firm support for Morocco’s sovereignty over its Sahara and its territorial integrity. “Morocco, under the visionary leadership of HM King Mohammed VI, has initiated cooperation with many countries,” he said, pointing out that the Kingdom is an entry point for Africa. For his part, the Governor of the province of Aousserd, Abderrahaman El Jaouhari stressed the political significance of the opening of a consulate general of Suriname in Dakhla, since this decision is a strong and unwavering support for the sovereignty of Morocco over its Sahara. This diplomatic representation is also meant to be an embodiment of the political, diplomatic and institutional position of the Republic of Suriname in support of Morocco’s territorial integrity, he said. This initiative, El Jaouhri added, marks a qualitative turning point in the close relations of friendship between Morocco and Suriname, to further strengthen them in various areas of common interest. This dynamic sets the foundation for a new stage in bilateral relations, making Morocco a strategic partner and a bridge that fosters the opening of Suriname to several European and Arab countries, and the African continent through the Dakhla-Oued Eddahab regional hub, he noted. The Republic of Suriname opened its embassy in Rabat on Wednesday, during a ceremony chaired by the Minister of Foreign Affairs Foreign Affairs, African Cooperation and Moroccans abroad, Nasser Bourita, and his counterpart from Suriname. The number of consulates opened in Morocco’s southern provinces increased to 25 (13 in Dakhla and 12 in Laayoune).