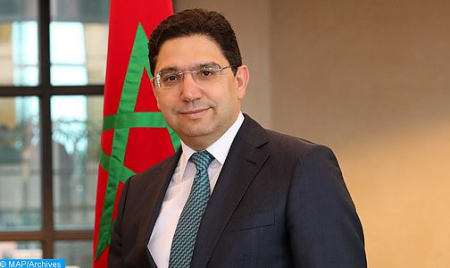 Minister of Foreign Affairs, African Cooperation and Moroccans Abroad, Nasser Bourita, and Burkinabé Minister of Foreign Affairs, Regional Cooperation and Burkinabe Abroad, Olivia Ragghnewendé Rouamba, underlined on Friday the excellent ties of friendship and solidarity between Morocco and Burkina Faso, two brotherly countries driven by a shared desire to further strengthen their cooperative relations in all areas of common interest. In a joint communiqué released at the end of their discussions, Mr. Bourita and Mrs. Ragnaghnewendé Rouamba commended the quality of the feelings of esteem and respect”, which characterize these relations, marked by an important exchange of visits, in particular the visit of HM King Mohammed VI to Burkina Faso in March 2005. While expressing their determination to strengthen the ties of friendship and cooperation in various sectors of common interest, the two ministers agreed to continue to explore new avenues of cooperation, particularly in the economic, scientific, technical and cultural fields, as well as cooperation in matters of security and the fight against terrorism and radicalism, for the mutual benefit of the two countries and peoples, the document points out. Mr. Bourita and Mrs. Ragnaghnewendé Rouamba expressed their “deep concern over the rise of extremism and terrorism in Africa, particularly in the Sahel region, and reaffirmed their commitment to work together for peace and stability”. The two officials committed themselves, in this regard, to ensure better coordination of their actions and mutual support, in regional and international bodies, to fight against the scourges of extremism and terrorism and thus create favorable conditions for regional and international peace and security and the economic development of the African continent. On this occasion, Mr. Bourita reiterated the position of the Kingdom of Morocco condemning the terrorist attacks perpetrated in Burkina Faso, which caused several victims and injuries, while expressing all the solidarity of the Kingdom with the people and the government of Burkina Faso and voicing condolences to the families of the victims, underlines the joint communiqué. The two ministers called on the international community to strengthen its commitment to fight against terrorism. On the economic level, the two ministers welcomed the creation of the Moroccan-Burkinabe Business Council as well as the great economic presence of Morocco in Burkina Faso, particularly in the banking, insurance, telecommunications, cement, electricity and the media sectors. Noting that the level of trade between the two countries increased from 47 million USD in 2016 to 71 million in 2019, the two ministers said that this level still remains below the potential offered by both sides and urged the economic operators and businessmen of the two countries to invest more in it. On the other hand, Mr. Bourita and Mrs. Ragnaghnewendé Rouamba welcomed the launch of the Monitoring Center of the Higher Communication Council (CSC) of Burkina Faso, on December 27, 2019, which is the result of a partnership aimed at strengthening relations of cooperation between the High Authority for Audiovisual Communication (HACA) and the CSC, following the agreement signed in Ouagadougou on July 9, 2019. Mr. Bourita reaffirmed, on this occasion, the readiness of the Kingdom of Morocco to put the Moroccan experience at the disposal of the Burkinabe authorities, through exchanges of visits and the organization of training for Burkinabe executives, says the joint communiqué. In this regard, the minister invited his Burkinabé counterpart to pay a working visit to Morocco, on a date to be decided by mutual agreement through diplomatic channels. At the multilateral level, the two ministers agreed to support, in a concerted and mutual manner, the Moroccan and Burkinabe candidacies at the level of continental and international bodies.