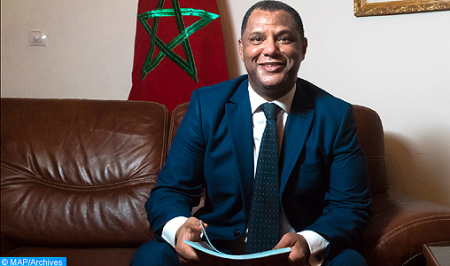 The signing of two agreements, recently in Dakhla, between Morocco and Senegal and of a Memorandum of Understanding (MoU) to promote their partnership in the areas of decentralization, information and communication technologies and civil aviation, is “the expression of the convergence of views that is in line with this proximity and solidarity between the two countries,” said Morocco’s ambassador to Senegal, Hassan Naciri, emphasizing that the ultimate objective is to ensure the optimal conditions for a common emergence. “It is also a renewed commitment to honor the historical legacy of the founding fathers of this exceptional relationship,” the Moroccan diplomat pointed out in an interview with Senegalese magazine ‘La Gazette’, published in its latest issue. “These are new instruments that complement what already exists, responding to developments and emerging needs in terms of cooperation in a regional and international environment in constant change,” the ambassador noted. “The ultimate goal is to bring together the optimal conditions for our common emergence,” he said. In this regard, the diplomat stressed that cooperation between the Republic of Senegal and the Kingdom of Morocco which “is based on the paradigm of common destiny, with all that this implies, covers all areas, without exclusion, including the military and security aspects.” The two agreements were initialed by minister of Foreign Affairs, African Cooperation and Moroccans Abroad, Nasser Bourita, and the Minister of Foreign Affairs and Senegalese abroad, Aïssata Tall Sall, on the sidelines of the inauguration ceremony of the Consulate General of Senegal in Dakhla. The first agreement on cooperation in decentralization defines the framework of cooperation between the two countries in this field. The second concerns cooperation in the sector of information and communication technologies and seeks to establish the framework for exchange and collaboration in this field. On the other hand, the ambassador stressed that Morocco, under the enlightened leadership of His Majesty King Mohammed VI, “has welcomed, since the beginning, the Senegalese Presidency of the African Union (AU) and is committed to accompany and support the realization of its agenda which is an intelligent and pragmatic declination of the AU’s 2063 Agenda.” “This is in line with the concordance of views and continuous interaction existing at the top of our two States and reinforces the recognized leadership of Senegal,” the diplomat said, noting that the Senegalese presidency of the AU takes place in a “context of anxiety marked by the Covid-19 pandemic and its socio-economic and political fallout, particularly for African countries.” In this regard, Naciri praised “the vision and pragmatism” of Senegalese diplomacy which “has already set the tone of voluntarism and activism of this presidency”, provided “brilliantly” by the Head of State Macky Sall. Regarding Madrid’s new stance on the Moroccan Sahara, Mr. Naciri noted that Spain “shows its commitment to the process of settling this conflict within the framework of Moroccan sovereignty, the only serious, credible and realistic option”. It thus follows in the footsteps of Germany and the United States, as well as several brotherly and friendly countries which have always sided with the legitimate rights of Morocco, including Senegal, he recalled.