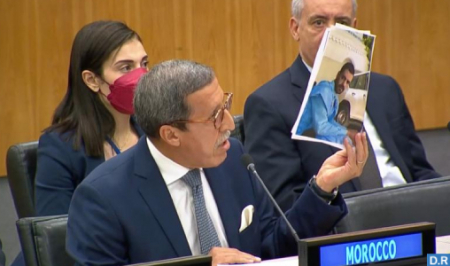 The ambassador, permanent representative of Morocco to the UN, Omar Hilale, said, Monday in New York, that Algeria kidnaps and tortures the sequestered populations of the Tindouf camps, which it is supposed to protect. “The United Nations Human Rights Committee has just published today a statement on a Sahrawi whom you abducted, kidnapped and tortured. He has disappeared and the Committee has asked you for clarification and reaffirmed your responsibility as the host country of the Tindouf camps, in violation of Article 2 of the Committee”, Mr. Hilale pointed out, while showing the photo of Mr. M’Rabih Ahmed Mahmoud Adda to the representative of Algeria Nadir El Arabaoui, during the annual C24 meeting. The ambassador then exposed Algeria’s violations of international law, while asking the Algerian diplomat: “You neither respect international legality nor international law. You have imposed a conflict on Morocco 45 years ago. You froze the Maghreb. You pushed the +polisario+ for the violation of the ceasefire and the military agreements in order to try to destabilize the region”. In response to his baseless allegations about a so-called decolonization of the Moroccan Sahara and an alleged right to self-determination of the population of this Moroccan region, Mr. Hilale answered El Arabaoui: “You are asking for self-determination, the decolonization of the Sahara and you forget to decolonize the Kabyles who have been under Algerian occupation since Algeria became a state, since the birth of Algeria in 1962”, adding that “Kabylia is an open-air prison, you are denying its people their most basic rights”. The Moroccan ambassador also pointed out that the Moroccanness of the Sahara is confirmed by immutable historical realities, indisputable legal foundations, an irreversible political dynamic, an irrefutable human attachment to the Homeland and confirmed international recognition, highly proclaimed during this C24 meeting. “No offense to those who show blindness, the Sahara is Moroccan and will remain Moroccan until the end of time,” he said.  “You have heard the dozens of countries which proclaim the Moroccanness of the Sahara, which proclaim their support for the political process, and which disagree with you”, Mr. Hilale added. “You are doing intellectual terrorism, either we are with Algeria or we are against Algeria”, he declared to El Arabaoui who was greatly disturbed and tormented by the massive support for the Moroccanness of the Sahara and the autonomy plan during this C24 meeting. The Moroccan diplomat then stressed that the current UN political process, led under the exclusive aegis of the UN, aims to achieve a political, realistic, pragmatic, lasting and compromise solution to the regional dispute over the Sahara, adding that Morocco remains engaged in this UN political process, in accordance with the resolutions of the Security Council since 2007. He added that the Kingdom reaffirms, in this regard, its attachment to the process of round tables enshrined in Security Council resolutions 2468, 2494, 2548 and 2602, with the effective participation of Morocco, Algeria, Mauritania and the “polisario”. He stressed that the realistic, pragmatic, credible and compromise political solution requested by the Security Council can only be the Moroccan Autonomy Initiative, within the framework of Morocco’s sovereignty and territorial integrity. “This Autonomy Initiative enjoys growing international support. Germany, Spain, Romania, the Netherlands, the Philippines, Serbia and Hungary have recently voiced their support for the Autonomy Initiative, as the only serious and credible solution, thus joining the majority of Arab and African states that support the autonomy plan under the sovereignty of Morocco”, recalled Mr. Hilale. The Ambassador noted that the Moroccan Sahara is a haven of peace, stability, calm and prosperity, where the local population enjoys all their rights and participates in the socio-economic development of the region, as is the case for the whole Moroccan territory. “Far from the baseless allegations of the other parties, there is neither war nor conflict in the Moroccan Sahara, but on the contrary it is a region which attracts national and foreign investors, hosts international conferences, hundreds of thousands tourists as well as continental sports tournaments,” he stressed. The considerable growth experienced by the Moroccan Sahara, on all levels, makes it a genuine model of integration and multidimensional, inclusive and sustainable development in Africa. In this regard, twenty-six countries and organizations, the last of which is Suriname, have so far opened consulates general in the cities of Laayoune and Dakhla in the Moroccan Sahara. This confirms the stability and serenity that prevail there and the international recognition of the Moroccanness of the southern provinces, said Mr. Hilale. The ambassador also recalled that since Morocco regained its territorial integrity, Algeria has been continuously active in maintaining a regional dispute under the pretext of defending the so-called right to self-determination, adding that Algeria “can no longer hide behind its pseudo observer status with regard to this regional dispute. It was and remains the principal and responsible party for the maintenance of this conflict”. He recalled, in this regard, that the Security Council has called on Algeria, in all its recent resolutions, including the last one, resolution 2602, to participate in round tables and to show commitment in a constructive manner with the ‘Personal envoy, in a spirit of compromise, throughout the duration of the process and until its successful completion. “Algeria’s refusal to return to the Round Tables, after having participated in the first two, is an affront to the Security Council and a violation of international law. This obstruction will never absolve it of its historic responsibility in this regional dispute,” Mr. Hilale pointed out. Responding to a fallacious and misleading assertion by the Algerian ambassador to the UN that Morocco offered to share its Sahara with Algeria in 1975, the Moroccan diplomat underlined sarcastically that “this scoop will spread worldwide”.