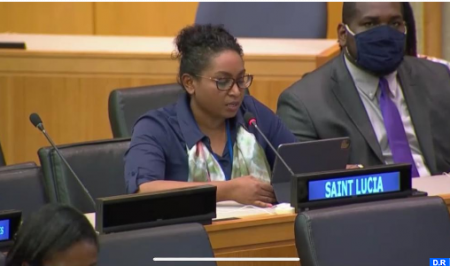 Saint Lucia has highlighted, before the UN C-24 in New York, the international support enjoyed by the autonomy plan presented by Morocco to close the regional dispute over the Sahara. “The 18 successive resolutions of the Security Council on the Sahara have welcomed the efforts of Morocco, including the autonomy initiative” supported by the international community, said the Permanent Representative of Saint Lucia to the UN, Menissa Rambally. In this context, Saint Lucia reaffirms its support for the work of the UN Secretary-General and his Personal Envoy for the Sahara, who has just completed his first tour in the region, said the diplomat, noting that her country supports the ongoing efforts to revive the UN process in order to reach a compromise solution to this regional conflict. She also welcomed Morocco’s commitment to the resumption of the political process in accordance with Security Council resolution 2602, expressing her country’s support for the holding of a third round table between all stakeholders. The Saint Lucian diplomat called on all parties to commit to a fair, lasting, realistic and mutually acceptable political solution to the dispute over the Moroccan Sahara. In this context, Saint Lucia joins other UN member states in supporting the Moroccan autonomy plan presented in 2007 to the UN Secretary General, and commends the Kingdom’s continued efforts to advance the process towards a resolution.