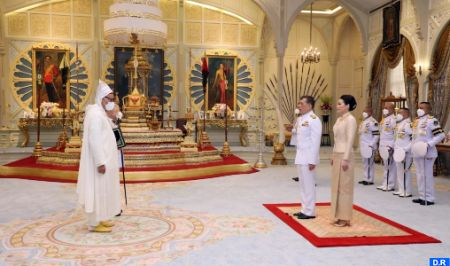 The ambassador of His Majesty the King to Thailand, Abderrahim Rahhaly, presented on Friday in Bangkok, his credentials to His Majesty Maha Vajiralongkorn Phra Vajiraklaochaoyuhua, King of Thailand. On this occasion, His Majesty the King of Thailand expressed his sincere thanks to His Majesty King Mohammed VI for His sentiments contained in the credentials. He also expressed to the Sovereign his best wishes of happiness and prosperity to the Kingdom of Morocco and its people. The audience took place in the presence of Her Majesty Queen Suthida Bajrasudhabimalalakshana and Minister of Foreign Affairs, Don Pramudwinai.