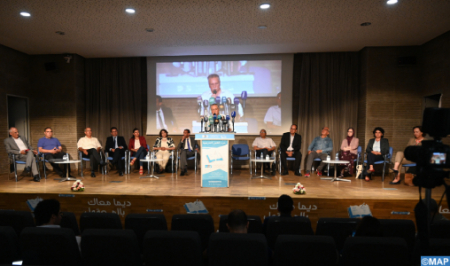 Progress and Socialism Party (PPS) Secretary General Mohamed Nabil Benabdallah on Tuesday said that his party’s activists seek to turn their 11th National Congress into a “major political step” to unite left-wing and progressive forces. Speaking at a press conference devoted to the party’s 9th Central Committee’s results discussion, Benabdellah stressed that the 11th congress will not only be an internal organizational stage but an important event to propose a democratic and progressive alternative. In this regard, he noted that in addition to addressing internal issues to strengthen the organization of the party and provide a leadership capable of facing the challenges, the PPS seeks to create a real dynamic to give new life to the political scene by playing a central role in the gathering of all the forces of the country. He added that the party can not alone propose a democratic and progressive alternative, noting that this alternative will only be possible once the various social and political forces such as parties and unions join the party, thus contributing to the emergence of a social and citizen movement capable of providing answers to this complex stage. According to the socialist politician, the party will try to consolidate its relations with the components of the parliamentary opposition parties, overcoming the differences with some of them in addition to taking steps to unite the left, trying to find common ground to start the process of building on solid foundations.