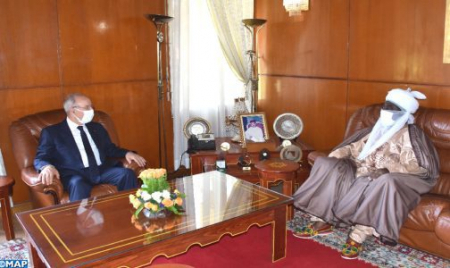 Aminu Ado Bayero, Emir of Kano in the Federal Republic of Nigeria, stressed, Thursday in Rabat, the importance of strengthening the “good” relations between Morocco and Nigeria. In a statement to the press after a meeting with the Minister of Religious Endowments and Islamic Affairs, Ahmed Toufiq, Ado Bayero said the purpose of his visit to the Kingdom is to strengthen the good relations between Morocco and Nigeria under the leadership of His Majesty King Mohammed VI and H.E. President Muhammadu Buhari, notably in the gas and agriculture sectors. The meeting was held in the presence of the Secretary-General of the Mohammed VI Foundation of African Ulema, Mohamed Rifki. The Emir of Kano, who is visiting Morocco from June 19 to 26 at the head of a high-level delegation, noted that this visit also aims to consolidate bilateral relations and enable the two countries to optimize benefits in light of promising common prospects. Referring to the economic power of Morocco and the economic prospects of Nigeria, Ado Boyero stated that this visit will make the relationship between the two countries even more “fruitful and stronger.” “The relationship between the royal family of Kano and the royal family of Morocco goes back almost a century,” he added. “I believe that what our ancestors have done is what has allowed the world to realize the importance of Morocco,” he said, praising the role played by His Majesty King Mohammed VI at national, continental, and international levels. For his part, Toufiq said that the region of Kano, located in northern Nigeria, has historical relations with the Kingdom, especially the Ado Bayero family, emphasizing the common values between the Kingdom of Morocco and the Republic of Nigeria. “All these common constants pave the way for actions and programs to develop Islamic values for the future,” he said in similar remarks. The program of the visit of the Emir of Kano and the accompanying delegation to the Kingdom includes visits to the Mohammed VI Museum for the Civilization of Water in Marrakech, the Mohammed VI Institute for the Training of Imams, “Mourchidines and Mourchidates” and the Al Quaraouiyine Mosque.