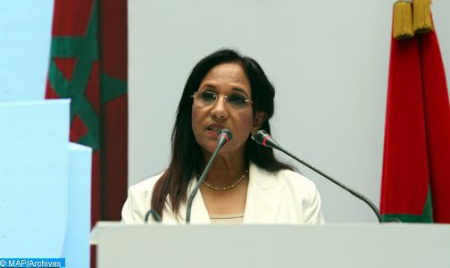 The President of the National Human Rights Council (CNDH), Amina Bouayach, called on Thursday in Strasbourg to rethink South-North cooperation in the area of ​​human rights as a “holistic and tightly interconnected” process. Speaking at the annual conference of the Council of Europe’s HELP Network (Human Rights Training for Legal Professionals), Ms Bouayach said that it is not just about economic or politics, but rather to integrate, in the decision-making process, the best possible tools that can protect the dignity and promote the development of individuals by placing the citizen/human being as actor and beneficiary of development. “The partnership to which we aspire, between the Northern and Southern shores, is not only about cooperation between partners, but should be a relationship based on a common commitment and a shared responsibility to make universal values ​​and principles of human rights vectors of development”, she pointed out during this two-day conference, which aims to review the achievements made, to examine and evaluate the different approaches capable of strengthening the implementation of the European human rights training program for legal professionals. Noting that new actors are taking more and more space, in particular digital actors, who are developing a digital, public space, which imposes new rules, Ms. Bouayach stressed that “as much as this space constitutes an enlargement of the of freedom of expression and opinion, as much as it represents a platform for the dissemination of hate speech, radicalism and incitement to violence. She deemed, in this regard, “appropriate to adapt the tools to better deal with speeches of incitement to hatred, violence and discrimination, but also fake news in the digital space”, noting that the culture of human rights is challenged by this space undermined by fake news. According to her, decision-making is increasingly done according to the algorithms of artificial intelligence and not through debate, consultation and the exchange of points of view. Hence the need to undertake, she pointed out, on a regular basis, “lucid and uncompromising” evaluations, in order to measure where we come from, what we have achieved and what we still have to do, especially since we are never immune to setbacks or renunciations in difficult or crisis times, like what we recorded during the first times of Covid-19, or when dealing with the various issues related to the issues of migration and refugees”. “Let us therefore be aware that the development of our partnership prospects means registering all our action under the sign of development, inclusion, equality between men and women, equal opportunities and respect for diversity and fundamental freedoms,” she said. With this in mind, achieving the 2030 agenda for development, for example, would contribute, de facto, to making the whole region prosper, noted the president of the National Human Rights Council, who noted the positive impact of the HELP program on legal professionals, especially concerning gender equality, the fight against violence against them and the fight against hate speech, hatred and violence. “These topical issues do not always find an answer in the legal provisions in force,” she said. Thus, pending the reform and updating of legal provisions, the program helps, at least, to support and educate legal professionals on these subjects, she noted. Currently, the Council of Europe HELP e-learning platform has more than 105,000 users.