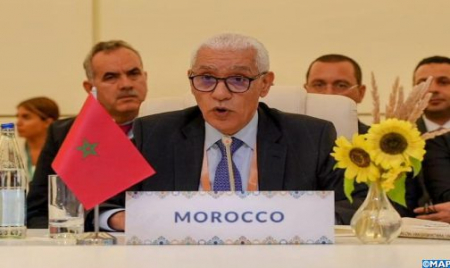 Speaker of the House of Representatives, Rachid Talbi Alami, pleaded Thursday in Baku for the consolidation of cooperation and multilateral partnership between member countries of the parliamentary network of the non-aligned movement while urging that solidarity and non-interference in the internal affairs of member countries be established as a doctrine in their ties. Speaking at the opening of the inaugural Congress of the Parliamentary Network of the Non-Aligned Movement, held from June 29 to July 02 in the capital of Azerbaijan, he stressed the need to promote the role of parliaments in the defense of peace, democratization of international relations, the fair and equitable distribution of wealth, the independence of non-aligned countries in terms of decision-making and their right to acquire new technologies, in addition to a better exploitation of wealth and the establishment of climate justice and also balanced trade. He stressed, in this regard, that respect for the sovereignty and territorial integrity of all member countries of this movement should be at the heart of priorities as for all other countries of the international community, drawing attention to the fact that “one of the major challenges posed before this geopolitical grouping is the dislocation of political regimes and separatism that represent a breeding ground for terrorism and fanaticism”. The speaker of the House of Representatives also noted that “many regions in the world are now in the grip of crises, sometimes fueled by countries that claim to defend noble values,” saying that “there can be no development, progress or institutions without peace and security and also without secure borders, which are necessary for the development of trade and the safe movement of people”. “The future is ours if we remain united by the bonds of cooperation, solidarity, peace and mutual respect and if we also succeed in preventing and resolving crises,” said Talbi Alami who participates in this conference leading a delegation of MPs. He stressed, in this context, that Morocco, under the leadership of HM King Mohammed VI, will continue its defense of this doctrine while working to “build promising partnerships and share its experiences and best practices with friendly countries, especially since events in the world strengthen more than ever the role of this international movement for peace, democracy and coexistence”.