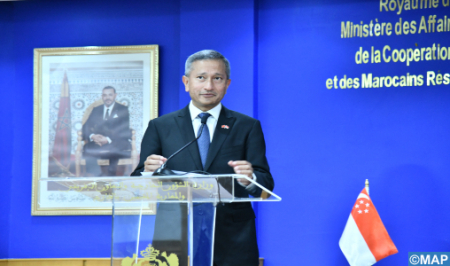 Singapore’s Foreign Minister Vivian Balakrishnan praised, Monday in Rabat, the leadership of His Majesty King Mohammed VI regarding tolerance and respect for religious minorities. The Kingdom represents a model of tolerance, living together, openness and respect for religious minorities, considering that these are “special and valuable” values, said Balakrishnan at a joint press briefing with Minister of Foreign Affairs, African Cooperation and Moroccans abroad, Nasser Bourita, at the end of bilateral talks. Indeed, Morocco sends a strong message to the rest of the world about tolerance and respect, said Singapore’s top diplomat, who is on a working visit to Morocco. Expressing his admiration for the Kingdom’s leadership under the enlightened guidance of HM Mohammed VI, the official highlighted the invitation extended by the President of the Republic of Singapore, Halimah Yacob, to the Sovereign to pay an official visit to his country to bring forward the history of Morocco and its principles of tolerance.