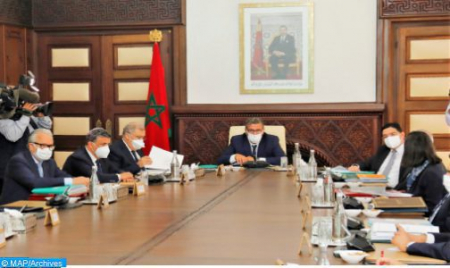 The Council of Government, meeting Thursday via videoconferencing under the chairmanship of the head of government Aziz Akhannouch, adopted Draft Decree 2.21.624 on the implementation of Article 212 of the Civil Aviation Code. Presented by the Minister of Interior Abdelouafi Laftit, this text is part of the efforts of public authorities to strengthen the Kingdom’s capacity to fight against terrorism and organized crime across borders, said Government Spokesperson Mustapha Baitas during a press briefing after the Council’s meeting. In the same context, he further noted that this text aims to comply with the guidelines and standards of international systems related thereto. He said that the Moroccan authorities have begun the implementation of a project on the creation of a system of advance processing of passenger data transiting through Moroccan airports (API/PNR). The draft decree also relates to the implementation of Article 212 of Law 40.13 on the Civil Aviation Code promulgated by Dahir 1-16-61 issued on May 24, 2016, which requires the air carrier to send to the public authorities the API/PNR data relating to domestic and international commercial flights and to submit all flights to these procedures, he continued. The project provides for the establishment of the national center for processing information on passengers and air flights placed under the authority of the Director General of National Security, said the Moroccan official. He added that the center will have mainly the establishment and management of a computer system suitable for the processing, analysis, exchange and preservation of information that air carriers and those who operate aircraft send. It also establishes the technical conditions and the means to ensure access to this computer system and the sending of this information, while ensuring their application.