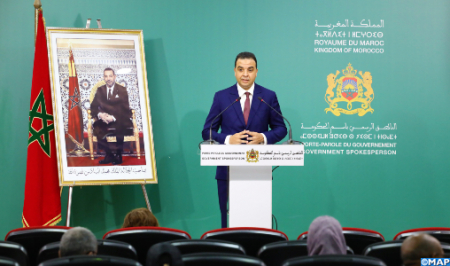 The storming of the metal fence in the province of Nador by illegal migrants was “premeditated and planned,” Minister Delegate in charge of Relations with Parliament, Government Spokesman, Mustapha Baitas said Thursday in Rabat. The available data shows that the storming of the metal fence in the province of Nador, on June 24, was “premeditated and planned.” It “was executed in a well-thought-out manner, unlike the usual storming attempts,” Baitas told reporters during a press briefing at the end of the weekly Cabinet meeting. During this operation, illegal migrants used, for the first time, methods involving great violence against the public forces, he said. In line with the humanitarian logic and the human rights dimension upon which the treatment of the migration issue is based in Morocco, the National Council for Human Rights sent a delegation to carry out an exploratory mission in the city of Nador and its region about the latest events, Baitas underlined. “Research and judicial investigations into these events are underway. As part of the principle of independence of the judiciary, we cannot discuss the conclusions and results of these pending proceedings,” he concluded.