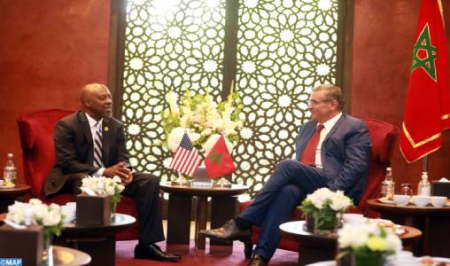 The Head of Government, Aziz Akhannouch, met, Wednesday in Marrakech, Ron Busby, president of the US Black Chambers, accompanied by his delegation, on a working visit to Morocco. During this meeting, the two parties exchanged on the aspects of partnership and cooperation that can link Morocco to the chambers of commerce represented in the organization, especially with regard to the promotion of investment and entrepreneurship, as well as the creation of ways of empowerment for businesses in the African continent. On the same occasion, the Head of Government reviewed the roles played by Morocco, under the enlightened leadership of His Majesty King Mohammed VI, to develop investments on the African Continent, through the conclusion of agreements between the Kingdom and partner countries, noting that Morocco has become the first African investor in West Africa and the second on the African Continent thanks to the Royal Vision of the Sovereign. “US Black Chambers” is a non-profit organization created in 2009 and based in Washington, DC.