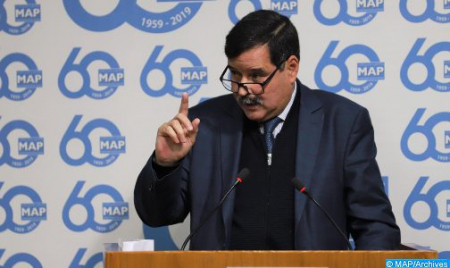 Writer-journalist Talaâ Saoud Al Atlassi considers that the Royal appeal to the Algerian presidency represents a bet for the future and a success for the common history. In his weekly column published Wednesday on the information site ”Machhid 24” under the title ”The Royal appeal to the Algerian presidency: A possible hope”, he notes that HM King Mohammed VI called in the Throne Day speech the Algerian presidency to renew the bonds of brotherhood and cooperation so that the geographical borders are transformed into real bridges of exchange and responsiveness, before adding that the Sovereign also urged it to work for the strengthening of bilateral relations to bring them in line with the genuine, warm and sincere ties between the Moroccan and Algerian peoples. The columnist also notes that the Royal appeal to the Algerian presidency “emanates from a conviction and a mature and deep historical vision and it is also concerned about the Moroccan and Maghrebian future while encouraging relations of solidarity and cooperation much better and more sustainable for Moroccans and Maghrebians”. He also emphasizes that this Royal appeal was previously launched on the occasion of many other royal speeches of great symbolic significance because it expresses a consistency and draws its foundation in a conceptual system advocated by HM King Mohammed VI for the development of Morocco. The same conceptual system that gave birth to the autonomy proposal for a peaceful settlement of the conflict over the Moroccan Sahara, he says, before explaining that “this Moroccan proposal was dictated by the desire to find an honorable way out of this conflict for all parties, including primarily the Algerian leaders, namely a solution without winner or loser”. He also recalled that “this peaceful proposal has attracted the support of the international community as evidenced by the resolutions of the United Nations Security Council, which resolutions are now considered a main reference in the treatment of the conflict over the Moroccan Sahara at the international level”. This specialist on Algeria notes, moreover, that this Royal appeal has been welcomed in the corridors of the Algerian presidency by a total silence, before considering that it is probably ”a silence with a political connotation and a positive meaning, a silence in the image of the wise man immersed in a contemplative attitude and which moreover, contrasts with the usual hostile reactions of the Algerian side”. It is hoped that this silent contemplation observed by the Algerian presidency vis-à-vis the Royal appeal is an indicator of a change of course favoring reason and pragmatism with the desire to win the confidence and support of Morocco to back Algeria in its multiple development challenges, instead of persisting in its hostility to the Kingdom, which may further aggravate the social, political and geostrategic situation of Algeria, already hopeless,” he underlines, before adding that “HM the King inaugurates promising prospects for Moroccan-Algerian cooperation in the face of problems and crises posed”. For Talaâ Saoud Al Atlassi, “Moroccan-Algerian relations are now at a crucial turning point that can promote, in case of non-maintenance of the status quo, promising prospects based on a common history, stressing in an optimistic tone that ”in a heightened and changing international context, Moroccan-Algerian relations have historical assets that can protect them against upheavals on the international scene. Better yet, strengthen the role of both countries as influential actors on the international level”.