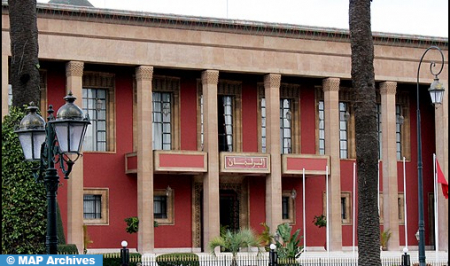 The General Assembly of the Association of Secretaries General of Francophone Parliaments (ASGPF) kicked off, Friday in Rabat, at the House of Representatives (Lower House). The Assembly will discuss three main themes related to “Bicameralism and the Relation between the Two Houses,” “the Code of Ethics and Conduct for Parliamentarians and Parliament Staff,” and “Parliamentary Research Centers: a Comparative Approach.” The draft agenda of the GA also includes talks with the French-speaking Parliamentary Assembly (FPA), the adoption of the minutes of the Bureau of the association, dated March 4, 2022, and the discussion of the financial situation of the FPA. During the Assembly, the participants will elect the members of the new Bureau of the Association of Secretaries General of Francophone Parliaments. In his opening speech, the Secretary General of the House of Representatives, Najib El Khadi highlighted the need to exchange and discuss the different practices used in the various francophone parliaments “not in front of a screen but during direct exchanges.” He also stressed the importance of continuing exchanges and discussions on comparative parliamentary practices during the study day organized at the end of the GA. For his part, the new Administrative Secretary General of the APF, Damien Cesselin, reviewed the aspects of cooperation between the FPA and the ASGPF, referring to the multi-faceted development program that aims to bring together the various actors of the two organizations to strengthen the parliament. The cooperation between the FPA and the ASGPF aims to provide training to strengthen the skills of French-speaking staff working in the various parliaments, such as the “Geoffrey-Dieudonée” training, he said. The Association of Secretaries General of Francophone Parliaments is a network that enables the exchange of experiences and expertise, and the examination of themes related to the organization and practice of parliamentary action. The Association gathers more than 100 members representing parliaments of francophone countries from all parts of the world.