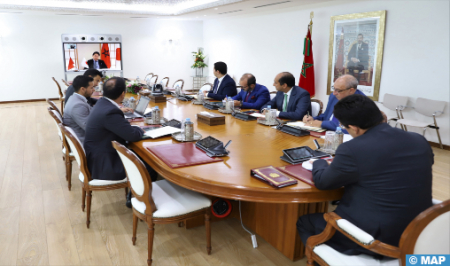 Minister of Foreign Affairs, African Cooperation and Moroccans Abroad, Nasser Bourita, held talks, Friday, by videoconference with his Japanese counterpart, Yoshimasa Hayashi. Talks focused on the state and prospects of bilateral relations and the incidents that have marred the last TICAD (Tokyo International Conference on African Development) Summit, held in Tunis on August 27- 28, 2022, said a statement from the Ministry of Foreign Affairs, African Cooperation and Moroccans Abroad. The two FMs welcomed the excellence and strength of relations between the two countries, characterized by the high esteem and close relations between His Majesty King Mohammed VI and the Emperor of Japan Hironomiya Naruhito. On this occasion, Mr. Bourita stressed that the Kingdom has always attached particular importance to the promotion and deepening of its relations with Japan, in accordance with the Vision and Orientations of the Sovereign. Both parties stressed that the level of economic relations between the two countries is still below the potential, capabilities and willingness of both countries, the ministry added. They agreed to undertake the necessary actions to strengthen the already extensive legal arsenal framing the bilateral cooperation, which was marked this year by the entry into force of two key agreements on investment and double taxation. High-level visits will be scheduled in the coming weeks to identify investment opportunities in Morocco for major Japanese economic groups, according to the same source. Mr. Bourita assured his counterpart that the Kingdom will provide the necessary facilities to attract and settle Japanese investments in Morocco. Cooperation in the field of food security and particularly in the sector of phosphates and fertilizers was also the focus of talks between the two ministers. In this regard, it was agreed to raise the relationship in this area to a higher level beyond that of a simple client-supplier relationship, said the statement. The two ministers also welcomed the level and quality of tripartite cooperation programs implemented by the Moroccan Agency for International Cooperation (AMCI) and the Japanese International Cooperation Agency (JICA) for the benefit of African partner countries. They also agreed to consider the possibility of expanding this cooperation to new countries and in other promising sectors, to be in line with the priority importance given by Morocco to Africa and South-South Cooperation, in accordance with the High Royal Instructions, and Japan’s interest with regard to its relations with the Continent. Regarding the TICAD Summit in Tunis, Mr. Bourita welcomed the commitment of Japan, the first country to launch a partnership forum with Africa, to achieve the development of the Continent, its stability and the welfare of its people, said the same source. He recalled that TICAD is a forum for partnership and development that must be protected from political maneuvers hatched by some known parties, paying tribute to the firm and consistent position shown by the Japanese delegation in Tunis. Mr. Bourita pointed to the responsibility of Tunisia, the host country of this edition of TICAD, for the serious deviations committed without consultation with the Japanese partner and which have led to the presence and participation of an entity not officially invited to the Summit. These deviations had an unfortunate impact on the results and influence expected from this Summit, which was supposed to be an event of celebration and consolidation of the Japan-Africa partnership. For his part, the Japanese minister said that Japan wishes to further develop the fruitful relations binding it to Morocco, especially in the economic field. Japan’s top diplomat said that the Japanese authorities will provide their support and commitment to the establishment of Japanese companies in the Kingdom, which offers a favorable and promising investment climate. Mr. Hayashi also reiterated his country’s commitment to contributing to social development, economic stability and skills development in the Kingdom. Referring to the recent events in TICAD 8 in Tunis, the Japanese FM reiterated his country’s regret regarding the absence of Morocco, which he described as an “essential partner”. He again confirmed that Japan did not invite the puppet entity to the TICAD VIII Summit and called on Tunisia to take all necessary measures in this regard. This “unequivocal” position was reiterated at the press conference he held in Tokyo, the Japanese FM said. Renewing his thanks for Morocco’s understanding of Japan’s position, Mr. Hayashi expressed his country’s keenness to continue working with Morocco within the framework of TICAD.