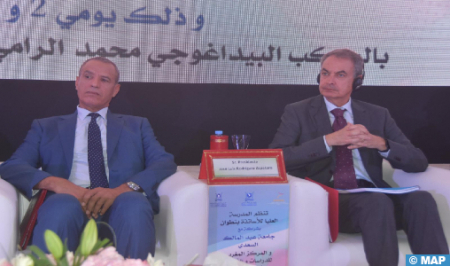 Morocco and Spain are a model of coexistence, cultural and civilizational mixing and good neighborliness, which should prevail in international relations in the present context, said Friday former president of the Spanish government, Jose Luis Rodriguez Zapatero. Zapatero was speaking at the opening of the 1st International Forum on “Moroccan-Spanish relations: present and future,” held at the Ecole Normale Supérieure (ENS) of Martil. The basic principles on which the relations between Morocco and Spain are built reflect the common awareness and the constant quest of both countries to ensure peace, stability and security at the regional and international levels, he said. According to Zapatero, the temporary divergences that may disrupt relations between the two countries, which share many common points, allow, in many cases, to review certain issues, strengthen dialogue and establish bilateral relations on a solid and balanced basis. Relations between Morocco and Spain are not limited to economic interests. It is a solid and ancient relationship that cannot be affected by transitional conditions, he explained. These relations are based on broad cooperation on important issues, including security, bilateral and multilateral cooperation on security at regional and international levels, migration and political positions that place the preservation of international cohesion and the achievement of stability and coexistence at the top of their priorities. Zapatero noted that both countries bet on the future and promote understanding and rapprochement between young people, as well as the exchange of experiences and strengthening scientific research. All these good practices can only strengthen the ties between the two countries, which continue to consolidate over time, he added. Regarding the positioning of Morocco on the regional and international scene, the former head of the Spanish government stressed that the Kingdom has increasingly strengthened its presence, under the enlightened leadership of HM King Mohammed VI. It has also become a key player for stability, security and peace at the international level in a world of conflicts, he said, adding that the initiatives undertaken by Morocco in this context are the most eloquent evidence of its position and its active role in the international scene. Morocco has become an influential player in the changes that the world is currently experiencing, Zapatero pointed out. In his opinion, the Moroccan autonomy plan in the Sahara emphasizes the credible and serious approach advocated by the Kingdom in the pursuit of a realistic political solution to the artificial conflict over the Moroccan Sahara. The opening session of the forum, held in partnership with the Abdelmalek Essaâdi University of Tetouan and the Moroccan Center for Studies and Research in Economics and Sustainable Development, was attended by the President of the University, and prominent Moroccan and Spanish politicians, academics, diplomats and thinkers. According to the organizers, this event is an opportunity to highlight the distinguished relations between Morocco and Spain in the cultural, political, security, economic and social fields.