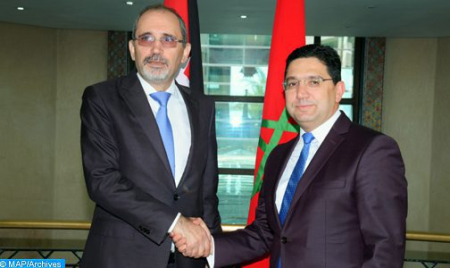 Morocco and Jordan have agreed to hold the meeting of the Joint High Commission between the two countries as soon as possible, said, Monday in Amman, Minister of Foreign Affairs, African Cooperation and Moroccans Abroad, Nasser Bourita. In a joint press briefing held after his talks with Jordanian Minister of Foreign Affairs, Ayman Safadi, Bourita said that a forum of Moroccan and Jordanian businessmen will also be held in parallel to this meeting to discuss ways of action and joint investment in the two countries or in other regions including the African continent, stressing the importance of removing all obstacles to cooperation between businessmen of the two kingdoms, including facilitating the granting of visas. In this context, he said that practical measures will be taken soon to resolve all these problems, in addition to the issue of air and sea transport, since it is considered essential to strengthen cooperation and trade between the two countries. Recalling the exceptional relations between the two kingdoms under the leadership of HM King Mohammed VI and His brother HM King Abdullah II, Bourita said that these ties have all the foundations to rise to the level of a strategic partnership in all areas. Under the leadership of the two Heads of State, the two kingdoms have achieved much in the framework of political coordination and bilateral cooperation, the Moroccan minister stressed. “Today what is imperative is to implement the main reference of this relationship, namely the Joint Communiqué issued at the end of the meeting of the leaders of the two countries in late March in Casablanca in 2019, to give more economic and humanitarian content to these ties,” he said. These talks, held on the eve of the meeting of the Council of the League of Arab States at the level of foreign ministers, focused on ways to strengthen bilateral cooperation in various areas and activate joint Arab action in the service of Arab causes, foremost among which is the Palestinian issue.