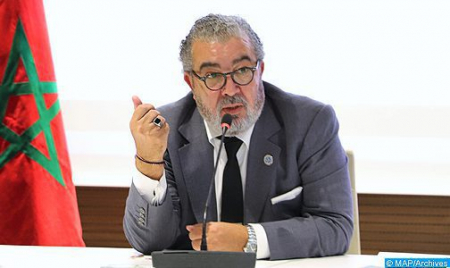 In trying to get out of a constitutional impasse that he himself has caused, Tunisian president Kaïs Saïed will have sacrificed the sovereignty of Tunisia by blindly aligning himself with Algeria, writes the editorialist of BAB magazine. In an “accurate and precise diagnosis” of the situation to say the least complex of Tunisia, published in the latest issue of BAB, intelligent magazine of the Moroccan News Agency (MAP), director general Khalil Hachimi Idrissi stresses that “the first thing, which is obvious, is that president Kaïs Saïed no longer fits the bill. His leadership has lost its legitimacy since his constitutional coup,” recalling that “the new constitution tailored to him is rejected by 70% of Tunisians”. In this editorial, published under the title “The Tunisian impasse”, Hachimi Idrissi notes that this chaos installed by president Kaïs Saïed has weakened the state in terms of independence of the country, – an alignment with Algeria of the generals has ruined the very idea of Tunisian sovereignty -, and neutralized all the ancestral immunities that this country had to exist honorably in the concert of nations and he did it brilliantly. “Kaïs Saïed will leave, therefore, his name attached to a vassalization of Tunisia to its powerful western neighbor,” he adds. The editorialist notes that Kaïs Saïed justifies all his abandonment of sovereignty by the economic crisis. “So be it! He claims to save the essential by obeying precisely the essential: the honor of the country. The country is in deep economic crisis, because Kaïs Saïed has been unable to initiate a train of credible reforms that would allow international donors to intervene in transparency. On this point, his failure is notorious”, he underlines. For Hachimi Idrissi, where Tunisia needed credibility to initiate the necessary reforms, Kaïs Saïed has demolished this credibility. “When it took more independence, more autonomy, more sovereignty to get out of the rut, Kaïs Saïed chose more Algeria. It is a fatal error,” observes the editorialist. What to do now?, wonders Hachimi Idrissi who believes that the answer to this question is not simple. “It is up to the Tunisian forces known for their dynamism, the political class known for its ability, civil society known for its foresight and sense of commitment, and security forces and military known for their unfailing patriotism to advance solutions for the benefit of the Tunisian people and their best interests”. “The power of one man has shown its inanity. Kaïs Saïed has led the country to institutional, political, economic and moral bankruptcy. It is time that this ceases”, says the editorialist. For the editorialist, the ideal for the country, which was given by some as a happy model of the Arab Spring, would be to have new presidential elections and, in the wake, legislative elections, to get out of this serious constitutional impasse. The new government that emerges from these consultations will try to repair what is repairable in this institutional chaos.