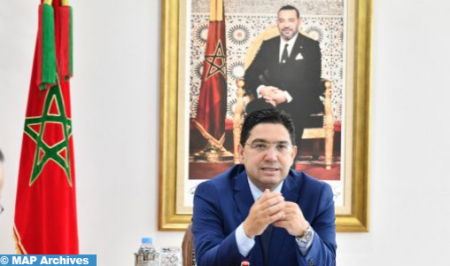 The next Arab Summit must be held on a basis of commitment to responsibility away from any narrow calculations or outdated logic, Minister of Foreign Affairs, African Cooperation and Moroccans abroad, Nasser Bourita, said Tuesday in Cairo. “The international and Arab context requires that the next Summit is held on the basis of a commitment to responsibility and far from any narrow calculations or outdated logic, by consolidating the necessary trust and respecting the roles of each party,” Bourita said in his speech at the 158th ordinary session of the Arab League Council held at the level of Foreign Ministers. Morocco, under the leadership of HM King Mohammed VI, is committed to joint Arab action within the main structures of the League of Arab States and the bodies under its authority, as demonstrated by the hosting by Morocco of seven Arab summits that have helped unify the Arab voice and give new impetus to joint Arab action, he said. Morocco’s FM called for “an objective reading of the reality of the Arab world, which is plagued by various internal and external disputes and maneuvers aimed at sowing division, supporting separatist impulses, triggering border conflicts, ethnic, sectarian and tribal, consume the region and depleting its wealth.” According to Mr. Bourita, the main problem lies in the lack of a clear common vision to face these challenges, in a manner that safeguards the security, stability as well as territorial and national unity of states. The Arab world “is facing a very difficult turn that requires that we urgently overcome the obstacles preventing the consolidation of cohesion and solidarity between our Arab countries and divert our attention and efforts from the major political and economic issues facing the Arab agenda and which must be addressed effectively,” he added. “The time has come to lay a solid foundation for an integrated Arab partnership to develop mechanisms for joint Arab action and build a modern, renewable and effective collective system,” the FM stated. This system should provide objective conditions for inter-cooperation to foster investment, rehabilitate the economy and the human element, improve performance, facilitate involvement in the community of knowledge and communication and enshrine the principles of democracy and human rights while taking into account the peculiarities and components of each country, he observed. Mr. Bourita also stressed that the successful completion of the Palestinian cause, in light of the successive developments it has witnessed, requires realistic and pragmatic approaches, away from the logic of one-upmanship and political manipulation. Morocco’s top diplomat stressed, in this regard, that the Kingdom, under the leadership of His Majesty King Mohammed VI, will continue to defend the legitimate rights of the Palestinian people, in particular their right to an independent Palestinian state, on the borders of 1967, with East Al-Quds as its capital, living side by side with Israel in peace and security. This issue is one of the constants of Morocco’s foreign policy as it has been developed since independence, he said. The FM recalled that HM the King, in his capacity as chairman of the Al-Quds Committee, works constantly at the diplomatic and political levels, as well as on the ground, to defend the holy city and preserve its religious, cultural, legal and historical character, while improving the living conditions and resistance of its inhabitants, through its executive body, the Bayt Mal Al-Quds Agency. Reviewing the situation imposed by the coronavirus pandemic, Mr. Bourita noted that Morocco, which believes in the principle of solidarity and interdependence, has spared no effort to provide its support to many Arab and African countries, under the high guidance of His Majesty the King, to help them overcome the consequences of the pandemic. He also addressed the issue of climate and its paramount importance, stressing in this context that hopes are placed on the Conference of the Parties to the United Nations Convention on Climate Change, which Egypt will host next November, to achieve positive achievements in this direction.