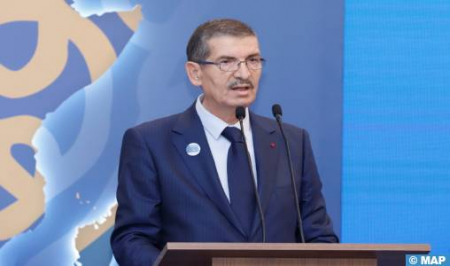 Morocco has established institutional governance in disaster risk management, said Ministry of Interior Secretary General and Wali Mohamed Faouzi at the opening of the 6th meeting of Directors General and African Directors of Civil Protection. “Thanks to the High Directions of HM King Mohammed VI, delivered in His speech in the aftermath of the earthquake of Al Hoceima in 2004, the Kingdom has begun to explore the various options for managing all the risks of natural disasters facing the country, moving from a curative approach to a preventive approach given that the cost of recovery and reconstruction is higher than that of prevention,” said Faouzi. As an application of this approach, Morocco has established institutional governance in disaster risk management and capacity building of some existing institutions involved in risk management, including the Directorate General of Civil Protection, the Center for Monitoring and Coordination, the National Institute of Geophysics, in addition to the Directorate General of Meteorology and the Royal Center for Remote Sensing Space. In addition to this, the creation in 2009 of a Fund to combat the effects of natural disasters, continued the Secretary General of the Ministry of Interior, noting that in 2016, with the support of the World Bank (WB), a Program of Integrated Management of Natural Disaster Risk and Resilience (PGIR) for an initial amount of 200 million dollars over a period of 5 years was established, with an extension until 2023 following the approval by the WB of an additional funding of 100 million dollars. In addition, he said, a Directorate of Natural Risk Management (DGRN) was established in 2020 within the Ministry of Interior housing a National Risk Observatory, responsible for collecting and sharing data and indicators on natural hazards in order to strengthen coordination between different stakeholders in the field of disaster risk management. The said Directorate also houses a National Center for Risk Forecasting, responsible for alerting by anticipation the populations exposed to risk and to secure people, property and economic activities, said Faouzi. Referring to the 6th meeting of Directors General and African Directors of Civil Protection, the Secretary General said it is “a testimony to the interest of ICDO to cooperation relations that unite African countries and reflects, also, the common desire of member countries to give dynamism and a strong impetus to cooperation relations in a field as sensitive and constantly evolving as that of Civil Protection. “It goes without saying that the risks and disasters that threaten the world today, and particularly our African continent, are multiple and diverse and can cause significant damage, climate change and its effects are the main factors,” said Faouzi, maintaining that this fact “implies on our part an effective commitment and a strong will to meet the common challenges of our continent in terms of prevention and management of risks and disasters. “It is clear that we can not face in isolation the risks and disasters that know no borders, and it is imperative to join our efforts with those of the community and international organizations to understand and remove, as far as possible, the roots of these dangers … while developing our own systems of civil protection and risk management and disasters in our countries,” said Faouzi.