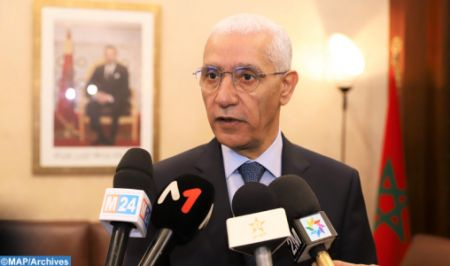 Speaker of the House of Representatives (Lower House), Rachid Talbi El Alami, on Tuesday held talks with the Ambassador of the Federative Republic of Brazil, Julio Glinternick Bitelli, focused on the deep-rooted and multifaceted relations between the two countries, especially at the parliamentary level. On this occasion, the two parties shed light on the deep-rooted bilateral and multilateral parliamentary ties. They also highlighted the importance of their consolidation through exchanging visits and efficient and constant communication between the two parliamentary friendship groups, as well as coordination in the various regional and international parliamentary fora. The two parties also affirmed the respect for States’ sovereignty, territorial integrity, and commitment to international legality, a statement from the Lower House said. The two parties lauded the solid historical ties linking Rabat to Brasilia and the role of the legislative institutions of the two countries in strengthening economic, commercial, and cultural cooperation and building multifaceted partnership bridges based upon deep parliamentary and political dialogue and durable and developed economic and commercial cooperation, according to the same source. The meeting was also an opportunity for the two parties to highlight the peculiarity of the parliamentary regimes of the two countries and the roles of parliamentary diplomacy at the bilateral and multilateral levels for it to be effective and interactive with the national, regional, and international questions inscribed as priorities on the joint parliamentary action agenda, the statement concluded.