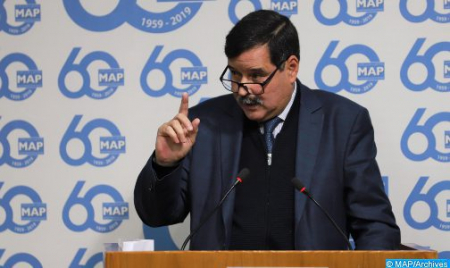 Moroccan Journalist Talaâ Saoud Al Atlassi said that the Algerian leadership manages its relations with Morocco according to a logic of “struggle for existence,” without being in disagreement with the Kingdom because of the consequences of frictions of geographical, economic or diplomatic and political borders. These frictions, which many states go through in their relations, “intensify when the interests of one country encroach on the borders and interests of another country, whether geographic, political or economic,” writes Talaâ Saoud Al Atlassi in a column published on Machahid 24. He explains that these are simple frictions that can be controlled by reaching an agreement to redraw and enforce these borders or “open them for mutual benefit, even after diplomatic and even military tensions …” The generals in Algeria “have formulated a doctrine of power, the essence of which is the struggle for existence against Morocco,” he notes, adding that Algerian leaders have erected this “doctrine” as an opportunistic lever to ensure their control and centrality in the management of the state. Therefore, they remain epidermic to any possibility of finding ways to open the “borders” of Moroccan-Algerian relations to understanding, solidarity and cooperation, “because these are ways in which their influence will diminish and their power will erode,” notes the columnist. It is in this same logic, he continues, that these generals have embraced the separatist movement in the Moroccan Sahara, giving it special, comprehensive and permanent attention, with the enthusiasm and intensity of those who defend their own existence, not the existence of their “protégés”. The Algerian generals exploit this movement as an “explosive mechanism” to undermine the path to a peaceful solution and paralyze the effectiveness of fraternal mediation, he stressed, noting that the separatists are not “ashamed” to launch a campaign against the resolutions of the UN Security Council and adopts an outdated discourse, which the international community has exceeded for years. He recalls that the Kingdom has no complex with Algeria and its presidency, noting that Morocco, state and people, can claim a historical right to the emergence of the Algerian state, through its contribution to the strong support of the struggle of the Algerian people for independence.  According to the columnist, the Kingdom also has the duty, by its membership in the Maghreb, to pave and immunize the ways of interaction Maghreb so hoped and necessary between the countries of the region, and whose engine is serenity, brotherhood and cooperation. He added that despite the violence of the Algerian leaders towards Morocco, through the announcement of the brutal rupture of political and economic relations and the closure of land and air links, HM King Mohammed VI, on behalf of the Moroccan people, maintained the hope that the Algerian presidency will review its position and adapt to the strategic changes that have occurred in the Maghreb region and its surroundings. He recalls that HM the King has launched fraternal appeals to the Algerian presidency for dialogue and understanding, without conditions or pressure, “calls that remain, so far, without response or interaction from the leaders of Algeria. The columnist notes that Morocco, under the leadership of HM the King, has presented the autonomy plan in the southern provinces of the Kingdom, an initiative that enjoys broad international support, stressing that its content is now the international reference adopted by the United Nations, as evidenced by the Security Council resolution of October last year. He also mentions some achievements of Moroccan diplomacy in the context of efforts to settle the regional conflict over the Moroccan Sahara, including the American recognition of the sovereignty of the Kingdom over its southern provinces, the qualitative and radical change of position of many European countries, including Spain and Germany, in favor of the national cause, as well as the continued support displayed by several Arab states to the territorial integrity of Morocco and the opening of consulates general of several countries in the cities of Dakhla and Laayoune. The journalist notes that these transformations “are not easy to digest for the Algerian leaders”, adding that this explains the aggressive attitude of the latter against Morocco.