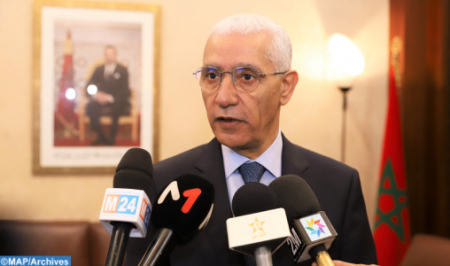 House of Representatives’ Speaker Rachid Talbi El Alami and Egyptian Ambassador Yasser Mustafa Kamal Othman express satisfaction, during talks Wednesday, with the good bilateral parliamentary relations and their significant development. These talks focused on bilateral and multilateral parliamentary relations, the exchange of experiences and the deepening of permanent communication between the legislative institutions of both countries, said the House of Representatives in a statement. At the beginning of this meeting, Talbi El Alami said that this meeting is likely to strengthen cooperation between the legislative institutions of the Kingdom of Morocco and the Arab Republic of Egypt. He welcomed the relations between the Moroccan and Egyptian lower houses, both at bilateral and multilateral levels, praising the fruitful coordination at the level of various international and regional parliamentary forums. For his part, Kamal Othman expressed his thanks to Talbi El Alami and the Kingdom for the welcome and hospitality extended to the Egyptian parliamentary delegations during their recent visits to Morocco. He expressed his satisfaction with the level and concrete development of bilateral and multilateral parliamentary relations, calling for the strengthening of mutual visits at the level of the presidency of the two legislative institutions, the intensification of cooperation and the sharing of expertise and parliamentary experiences. Several bilateral, regional and international parliamentary issues of common interest were discussed at this meeting, the same source added.