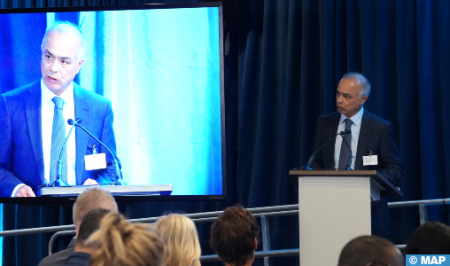 Under the high directives of His Majesty King Mohammed VI, Morocco has made significant progress in education and continues to work for a “true educational renaissance,” said Saturday in New York, the Minister of National Education, Preschool and Sports, Chakib Benmoussa. Speaking at a high-level event organized by Morocco and the United Nations Children’s Fund (UNICEF) under the theme “Investing in school health and nutrition to transform education and the lives of young people”, Benmoussa noted that the nexus education, health and nutrition is a fundamental pillar of the Moroccan education sector. “It is also at the heart of the national roadmap for the transformation of education and the New Development Model, adopted in 2021 under the High Royal guidance,” he said at this side event, organized as part of the High-Level Summit on Education Transformation, held in New York (16-18 September), at the initiative of the United Nations Secretary-General, António Guterres. Benmoussa noted that Morocco has made tremendous efforts to strengthen health and nutrition programs and social support to students, especially those from rural and vulnerable areas. In addition to the accommodation of students, school transport, the royal initiative “one million school bags”, the program “Tayssir”, direct financial assistance to families of students, the food service plays an important role in the retention of students in school, he noted. The Minister also said that in parallel with the expansion of the number of beneficiaries of boarding schools and school canteens, Morocco has made significant efforts to improve the service of catering for students, including the quality of meals and this, through the guarantee of the service of catering throughout the school year, the regular control of canteens and boarding schools to ensure favorable conditions of safety and prevention of student health by contractual school health doctors and the extension of the structure of reception by creating new boarding schools and school canteens, especially in rural areas, to fight against school dropout. These efforts, he continued, have included increasing the budget per child for healthier meals, expanding elementary school health visits, and integrating reproductive health education into the school curriculum and activities. They have also been marked by nutrition education reinforced by the school curriculum and complemented by the national nutrition week and school activities, in addition to road safety education reinforced by dedicated programs and activities, including the participation of the Police and the National Gendarmerie. Benmoussa also noted that Morocco has launched the Nutritional Education Program in schools “Sehaty Fi Taghdiyati”, stating that this program aims to emphasize the importance of nutrition in the fight against school failure and the promotion of health of students. It involves the organization of awareness sessions on nutrition education in schools, the revision and production of educational kits, he said. This issue also benefits from the technical support of UNICEF under the Cooperation Program (CPD) between the two parties and other partners, he said, recalling that the CPD Morocco-UNICEF, adopted last September 6 by the Executive Board of UNICEF, aims to support education to achieve the skills and learning abilities defined at the national level and health services and nutrition equitable and quality to cover disadvantaged areas. The minister similarly stressed that Morocco is calling for greater investment in nutrition and health and stronger collaboration to transform education, stressing that it is critical to ensure sustainable funding and pursue innovative approaches to finance and foster coordinated efforts that link education, health and food systems and implement multi-component programs. “This work is more important now than it has ever been if we are to truly transform our schools – the future of our young generations,” he said. The Minister also noted the importance of international cooperation for development and South-South and triangular cooperation that should be, according to him, is an important lever to contribute to the transformation of education. This high-level event, which took place in the presence of the Ambassador Permanent Representative of Morocco to the UN, Omar Hilale, was marked by the participation of the Global Director of Education at UNICEF, Robert Jenkins, the Deputy Executive Director for Education at UNICEF, Stefania Giannini and the Under-Secretary General of the United Nations, coordinator of the initiative “strengthen nutrition”, Gerda Verburg. The meeting was also attended by the Ministers of Education of Malawi, Niger and Jamaica, and the Secretary of Education of Argentina. Discussions at the event focused on the importance of an integrated approach to school health and nutrition and the status of progress globally and regionally, as well as ways to expand budgetary space for integrated school health, including mental health and nutrition programs. The Education Transformation Summit, which is being held as part of the 77th UN General Assembly (current 13-27), will be marked by a high-level event on Monday that will bring together at least 90 heads of state and government, ministers and other officials to discuss ways to ensure that education is transformed to safeguard the future of millions of children around the world.