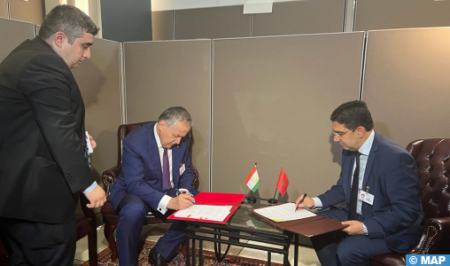 Morocco and Tajikistan signed, Thursday in New York, a visa waiver agreement for holders of diplomatic, official and service passports. The agreement was signed by the Minister of Foreign Affairs, African Cooperation and Moroccans Abroad, Nasser Bourita and Tajik peer Sirojiddin Muhriddin at the end of their talks at the United Nations headquarters in New York. In a statement to the press, Muhriddin welcomed the signing of this agreement that opens a “new page in relations between two brotherly countries.” He expressed the desire to strengthen the legal framework of these relations and to build on the enormous opportunities for cooperation between the two countries especially in the fields of economy and tourism. The meeting between Mr. Bourita and Muhriddin, which took place on the sidelines of the 77th General Assembly of the United Nations, was attended by the Ambassador, Permanent Representative of Morocco to the UN, Omar Hilale.