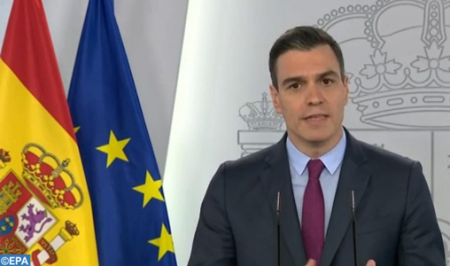 Spain reaffirms its position in support of the autonomy plan as announced in the Joint Declaration at the end of the discussions between His Majesty King Mohammed VI and the President of the Spanish government, Pedro Sánchez, a senior official at the Spanish Foreign Ministry told MAP on Friday. “Spain recognizes the importance of the Sahara issue for Morocco as well as Morocco’s serious and credible efforts in the framework of the United Nations to find a mutually acceptable solution. As such, Spain considers the Moroccan autonomy initiative, presented in 2007, as the most serious, realistic and credible basis for the resolution of this dispute,” said the joint statement quoted by the Spanish diplomat. The Moroccan-Spanish Declaration was adopted at the end of the visit to Morocco, at the invitation of His Majesty King Mohammed VI, of the President of the Spanish government, Pedro Sánchez. The letter sent by the President of the Spanish Government to His Majesty the King on March 14, 2022, as well as the telephone conversation between the Sovereign and the President of the Spanish Government on March 31, opened a new page in the relations between the Kingdom of Morocco and the Kingdom of Spain.