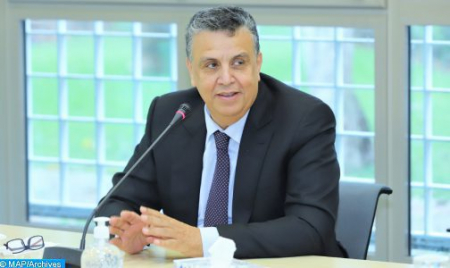 Minister of Justice Abdellatif Ouahbi met, Monday in Kuwait, with Kuwaiti peer Jamal Hadhel Salem Al-Jalawi, as part of a series of visits to his counterparts in the Gulf States. According to a statement released by the Moroccan Ministry of Justice, Ouahbi reviewed the Moroccan experience in the field of justice at the levels of legislation, infrastructure, digitization, training and prospects that it will open in the future. Ouahbi stressed, during this meeting, the importance of cooperation between the two countries and the exchange of experiences in order to promote the development of the experience of both countries in the field of justice. For his part, the Kuwaiti Minister of Justice reviewed his country’s pioneering experience in the justice sector, noting the two countries’ shared desire to strengthen cooperation in the field of justice, especially the exchange of expertise, in order to raise the level of the sector in both countries. The statement added that both sides welcomed the excellent political relations between the two countries, which have been reflected positively on economic cooperation and increasing the volume of investment. Kuwait is the fourth stop on the Minister of Justice’s tour of a number of Arab countries, after visiting his counterparts in the Kingdom of Saudi Arabia, Bahrain and the United Arab Emirates. It also includes Jordan and Egypt.