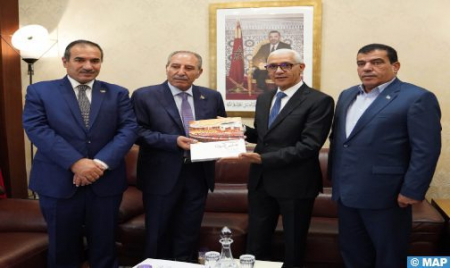 House of Representatives’ Speaker Rachid Talbi Alami on Monday held talks, with a parliamentary delegation from Jordan, on means to strengthen the relations of friendship and parliamentary brotherhood between the two countries and promote bilateral relations. During his meeting, Talbi Alami emphasized the strength of historical ties between the two countries and the satisfactory level of relations between Rabat and Amman, which is reflected in the similarity of views on several issues of common interest. According to a statement released by the Moroccan lower house, Talbi Alami stressed the depth of historical and cultural ties between Morocco and Jordan, and the quality of fraternal relations between the Heads of State of the two countries, also welcoming the level of bilateral parliamentary relations. He called, in this sense, to further strengthen these parliamentary relations in order to preserve and consolidate the achievements and strengthen communication between parliamentarians, in order to promote bilateral and multilateral coordination and to open up on current issues of common parliamentary interest. The Moroccan official, on this occasion, recalled the achievements of Morocco and the dynamics underway in terms of institutional building, the establishment of democracy and human rights, the economic takeoff and the establishment of the social state. In this context, he explained that the Moroccan lower house has managed to occupy a distinguished position at the national level and within many bodies and parliamentary organizations at the continental, regional and international levels. In this regard, he affirmed the readiness of the House of Representatives to share experiences and expertise with the Jordanian parliament.