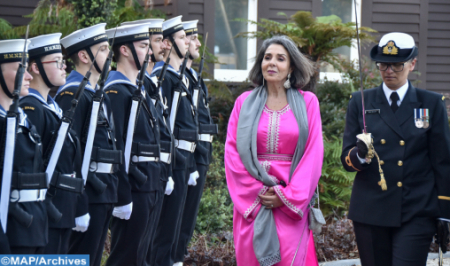 Morocco’s ambassador to Australia, Wassane Zailachi, met on Thursday with speaker of the House of Representatives of the Australian Parliament, Milton Dick. During this meeting, the Australian official highlighted the common economic interests between Morocco and Australia, saying he was “optimistic” about the potential for strengthening trade between the two countries as well as human exchanges, especially of students. The speaker of the Australian House of Representatives said, on the other hand, willing to promote exchanges between the legislative institutions of Morocco and Australia and to support any initiative to strengthen inter-parliamentary cooperation through an exchange of visits between members of parliament of both countries and the exchange of experience in areas of common interest. For her part, the Moroccan ambassador in Canberra reiterated the determination of Morocco to deepen Moroccan-Australian relations in the political and economic fields, noting that the two countries have an enormous economic potential to build a solid foundation for bilateral partnership in promising sectors for the future of both countries. Zailachi stressed that Morocco is a destination of choice for foreign investors. With its expertise and its proven multisectoral experiences in Africa, the Kingdom offers an opportunity to Australian operators for a triangular cooperation to access the promising market of the African continent, she said. The diplomat noted that the privileged geographical position, the political and economic stability and the quality infrastructure enjoyed by Morocco, positions the Kingdom as a key partner for Australia in the region. Several Australian companies operate in Morocco, particularly in the agricultural and mining sectors, she recalled.