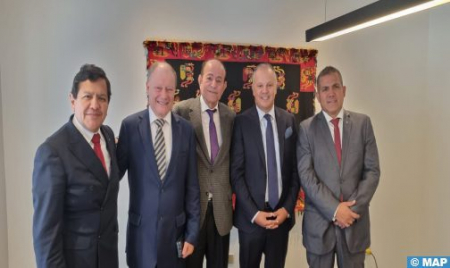 The common values and historical relations uniting Morocco and Peru, especially after the historic visit of His Majesty King Mohammed VI in this South American country in 2004, will remain rooted and cannot be affected by some conjunctural and volatile positions, said members of the Peruvian parliamentary delegation representing this country in the Andean Parliament. The Peruvian deputies, who were speaking at a meeting Saturday in Lima between the representative of the House of Advisors in the Andean Parliament, Abdelkader Salama and representatives of Peru in Parlandino, stressed that the new position of their country on the Moroccan Sahara was contrary to the historical distinguished ties between the two countries. They said that this position is rejected by the majority of Peruvians through their representatives in Congress who refuse any damage to relations between the two friendly countries. This is a “temporary” position that “cannot last long,” said the Peruvian deputies, quoted in a statement of the House of Advisors received by MAP. In addition, the Peruvian MPs noted that their visit to Morocco and the southern provinces, on the occasion of the session held by the Andean Parliament in the city of Laayoune last July, allowed them to take the measure of economic and social development achieved in these regions and the climate of security and stability that reinforces their just position in favor of the territorial integrity of the Kingdom. During this meeting, Salama expressed the consideration of the House of Advisors and all components of the Moroccan Parliament, for the sincere and fraternal efforts of the members of the Andean Parliament representatives of Peru in the defense of the just causes of the Kingdom and their commitment to solid ties with Morocco, based on the development of assets and opportunities and on respect for the territorial integrity and sovereignty of Morocco on all its territory. The meeting was also an opportunity for Salama to express the willingness of the Moroccan Parliament to translate the distinguished process of relations between the Moroccan and Andean legislative institutions into action plans and roadmap with clear objectives and mechanisms, in order to exchange and share the pioneering experiences of Morocco in the field of alternative energy and food security, as well as in migration. The meeting, which was marked by the presence of the Ambassador of HM the King to Peru, Amine Chaudri, was attended also by Carlos Ramirez, vice-president of the Andean Parliament for the Republic of Peru, and the Andean parliamentarian Gustavo Pacheco, president of the World Conference on the Common Collective Law of the Andean System, as well as Fernando Arce, member of the Andean Parliament and former Peruvian minister. This event is part of the participation of Salama, accompanied by the head of the Department of External Relations of the House of Advisors, Hassan Azerkan, in the General Assembly of the Andean Parliament and the First International Congress on the Common Collective Law of the Andean System, held in the Peruvian capital (27 September – 2 October 2022).