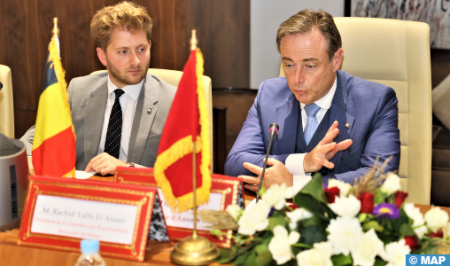 The autonomy initiative presented by Morocco to settle the artificial conflict over the Moroccan Sahara “is the realistic solution” to bring this matter to a close, said, Monday in Rabat, the MP and Mayor of Antwerp (Belgium), Bart De Wever. During a meeting with speaker of the House of Representatives, Rachid Talbi Alami, the mayor of Antwerp noted that Morocco represents a link between Africa and Europe and a pillar of stability in the region, highlighting the stability and development dynamics in the Kingdom, said a statement by the House of Representatives. In this regard, De Wever, on a visit to Morocco leading a large delegation, welcomed the leadership of the kingdom in the field of renewable energy, infrastructure and ports, citing in particular the port of Tangier Med. He noted, in this sense, that his visit aims to explore investment opportunities and establish win-win economic partnerships. For his part, the speaker of the House of Representatives gave an overview of the most important historical stages of the artificial conflict over the Moroccan Sahara, stressing that the autonomy initiative presented by Morocco for the final settlement of this issue has the support of the international community “which considers it the only realistic political solution to ensure stability and prosperity in the region”. Talbi El Alami also mentioned the major projects in which the Kingdom is engaged under the enlightened leadership of HM King Mohammed VI, highlighting in particular projects related to renewable energy, rationalization of water use, food security and comprehensive development of regions, including the southern regions of the Kingdom, the Atlantic port of Dakhla, and the project of Moroccan-Nigerian gas pipeline. This meeting was an opportunity to exchange on the Moroccan model in terms of management of religious affairs under the leadership of HM King Mohammed VI, Commander of the Faithful, as well as on the Moroccan experience in the field of training of imams and on several issues of common interest.