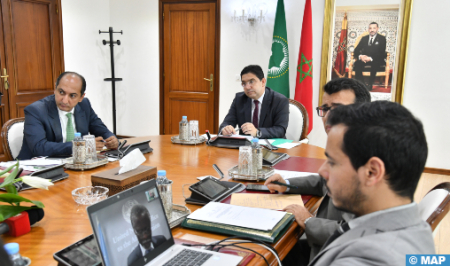 Morocco is committed to promoting South-South, North-South and triangular solidarity cooperation, in order to address the complex and transnational nature of the terrorist threat in Africa, said Friday in Rabat, the Minister of Foreign Affairs, African Cooperation and Moroccans Abroad, Nasser Bourita. This commitment is reflected first by the Kingdom’s accession to several sub-regional cooperation frameworks aimed at strengthening the collective capacity of African countries to protect their borders from transnational threats, Bourita told, via videoconferencing, a ministerial meeting of the African Union’s Peace and Security Council (AU-PSC) on development and de-radicalization as levers in the fight against terrorism and violent extremism. During this ministerial meeting, the first held under the Moroccan AU-PSC chairmanship for the month of October, the Minister also referred to the efforts of the Kingdom in the field of de-radicalization, including through the establishment of specialized institutions to train African Imams, like the Foundation Mohammed VI of African Ulema “which is established as a real platform for exchange and sharing to address the misinterpretation of religious texts and messages.” Bourita also noted that the Kingdom is committed to promoting and defending African security concerns in the international agenda, including during his three consecutive terms as co-chair of the Global Counter-Terrorism Forum (GCTF) and his co-chairmanship of the Africa Focus Group of the Global Coalition against ISIS. With 48% of the victims of terrorism in the world are African, 7,234 terrorist attacks that have claimed the lives of 28,960 victims in 2021 and 27 terrorist groups listed on the UN sanctions list, Africa is experiencing “an unprecedented proliferation of terrorist groups,” said Bourita, noting that the economic impact of terrorism in Africa over the past 10 years has amounted to 171 billion dollars. Noting that the Sahel-Saharan region has become in the space of a decade the second region of the world most affected by terrorism, the government official said that “this bleak picture should challenge us on the need to adopt a holistic approach that devotes more effort to the underlying factors fuelling the proliferation of radicalization and terrorism on our continent. Among these factors, Bourita cited “the latent multiplication” of separatist groups that “is now established as a real catalyst for political and security instability on the continent, by allying themselves with, or even absorbing, the agendas and modus operandi of terrorist and criminal entities. To dry up the sources of the terrorist threat, Morocco advocates, among other things, the establishment of a platform for collaboration between Member States for the exchange of expertise in de-radicalization and the establishment of a development fund dedicated to financing African collective action in socio-economic and human development, said Bourita. Morocco is, since last Saturday, the chair of the Peace and Security Council of the African Union for the month of October, as part of its second term of three years in this decision-making body of the pan-African organization. This presidency in the framework of this second three-year term, after the one of 2018-2020 obtained with more than two thirds of the votes during the AU Summit last February in Addis Ababa, crowns the efforts and actions undertaken by Morocco under the visionary leadership of HM King Mohammed VI who advocated for “the emergence of a New Africa: a strong Africa, a bold Africa that takes charge of defending its interests, an influential Africa in the concert of nations.