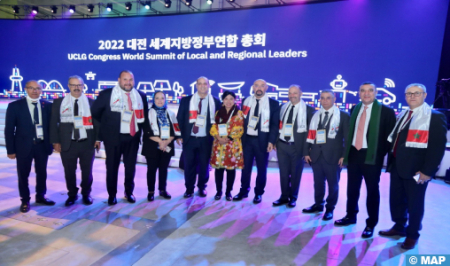 The 7th World Congress and Summit of Local and Regional Leaders, convened by United Cities and Local Governments (UCLG), kicked off Monday in the South Korean city of Daejeon with the participation of delegations from 140 countries including Morocco. The Kingdom is represented at this event, held under the theme “Local and Regional Governments Breaking Through as One”, by a large delegation including representatives of the Ministry of the Interior and the three associations of Moroccan local authorities. The first day of this summit was marked by the holding of several coordination meetings and workshops on the themes chosen by the organizers, and in which the Moroccan delegation took part intensively. Members of the Moroccan delegation also contributed to the workshops scheduled. Members of the Moroccan Association of Presidents of Communal Councils (AMPCC) participated in these sessions and led meetings and panels on various topics related to territorial development, territorial marketing, youth and women’s issues. In parallel to this summit, Mounir Lymouri, AMPCC president received a certain number of foreign delegations taking part in this summit. The discussions focused on several themes related to the management of local affairs, decentralized cooperation and the exchange of successful experiences. Lymouri highlighted, in a statement to MAP, the importance of the participation of the AMPCC in this global event, noting that the association is positioned at the forefront of local action in the world since Morocco has taken the presidency of the UCLG-World at its sixth summit, held in 2019 in South Africa. The summit of Daejeon is of paramount importance especially since it will discuss several issues relating to the management of the local thing in the world, capacity building of local elected officials in the development and implementation of public policy at the local level, he said.