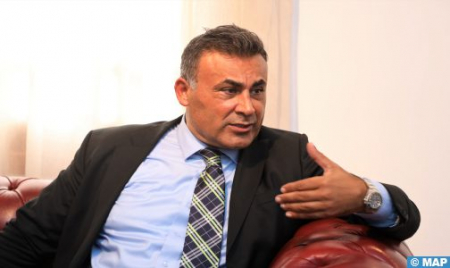 The Danish parliamentarian Naser Khader said, on Wednesday in Rabat, that the autonomy plan presented by Morocco offers “the most appropriate solution” to end the artificial conflict over the Moroccan Sahara. In a statement to M24, MAP’s news channel, following his talks with the chairman of the Royal Advisory Council for Saharan Affairs (CORCAS), Khalihenna Ould Errachid, Khader said that this meeting allowed him to deepen his knowledge of the Moroccan Sahara issue. In a statement, CORCAS said that during this meeting with this member of the Committee on Foreign Affairs in the Danish Parliament, Ould Errachid made a presentation on the history of the Moroccan Sahara and highlighted the latest developments on this issue. The CORCAS’ chairman recalled also that the Moroccan autonomy initiative has an increasing support at the international level as a credible, serious and realistic solution to the artificial conflict over the issue of the Moroccan Sahara. These talks took place in the presence of the Council’s Secretary General, Maouelainin Ben Khallihenna Maouelainin and Moulay Ahmed Mghizlat, member of the CORCAS.