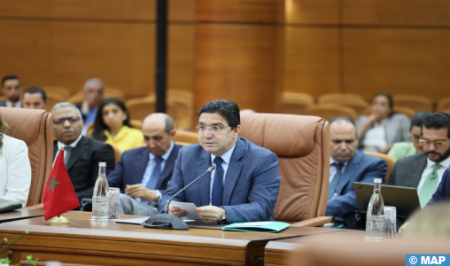 The Moroccan-Spanish High Level Meeting (HLM) is scheduled for the beginning of next year, the Minister of Foreign Affairs, African Cooperation and Moroccan Expatriates, Nasser Bourita, announced on Tuesday in Rabat. Speaking at a press briefing on the occasion of the signing of a Memorandum of Understanding on the establishment of a Green Partnership with the European Union (EU), Bourita said that this meeting will be an “important moment” in the new phase of relations between Rabat and Madrid launched after discussions between HM King Mohammed VI and the President of the Spanish government, Pedro Sanchez, last April. “The High Level Meeting is an important moment in our bilateral relations” with Madrid, he said, adding that it will take place early next year on a date to be agreed between the two countries. “It will be an important moment that will reflect this positive state of mind, this state of mind oriented towards the respect of commitments that animate today’s Moroccan-Spanish relations,” he stressed, recalling that the Joint Declaration between Rabat and Madrid adopted after discussions between HM the King and Sanchez “specifies the principles that define this new phase and helps define priorities and clarify positions on issues of interest to both countries”. Since this joint statement, a roadmap has been established and is the subject of concerted work with the Spanish government, the Minister said. “All the working groups have been activated with many elements that have been implemented and all the commitments contained in the roadmap will be respected and achieved,” he said, adding that the two partners will also have “sufficient time to prepare the parliamentary forum, the business forum and the mobilization of all stakeholders in this relationship.”