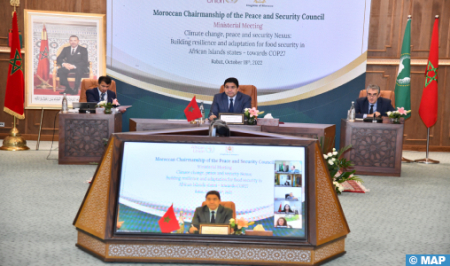 Morocco has always worked, under the wise leadership of HM King Mohammed VI, for common African positions on environmental issues, especially in small island states, said Tuesday in Rabat, the Minister of Foreign Affairs, African Cooperation and Moroccan Expatriates Nasser Bourita. “This commitment is rooted in the African policy of His Majesty King Mohammed VI, may God assist him, as well as in the vision of active solidarity and collective responsibility, which the Sovereign has constantly defended since the Earth Summit in Rio in 1992,” said Bourita, who was speaking at a ministerial meeting scheduled by the Moroccan presidency of the Peace and Security Council (PSC) of the African Union. “Guided by this Royal Orientation, Morocco is at the forefront of efforts to strengthen the climate resilience of African island states,” he said at the meeting, highlighting the various concrete actions taken in this direction. Morocco has ensured the organization of the 1st African Action Summit, on the sidelines of COP22, the establishment of three African Commissions on climate, including one dedicated specifically to island states and the organization, on the sidelines of COP27 jointly with the Seychelles, a ministerial meeting on “the operationalization of the Climate Commission of Island States,” he said. The Kingdom has also established the Climate Change Competence Center of Morocco (4C Morocco), as a platform for capacity building and exchange of information on climate, and launched the advocacy for any cooperation with Africa necessarily integrates a support approach for adaptation to climate requirements, added the Minister. In this sense and in anticipation of the COP27, Bourita expressed his hope that this ministerial meeting approves a series of recommendations for sister island states. These include the shared but differentiated mobilization of financial resources, financial support, institutional and capacity building for the development of a blue and green economy or support to Small Island States in the implementation of courses of action decided by the UN Summit on Food Systems, he said. In addition to the exchange of expertise for the strengthening of policy frameworks and actions at national and regional levels, the strengthening of early warning systems of the countries in question, the prioritization of funding to African countries, as part of the implementation of the climate-smart agriculture strategy, as well as the strengthening of subsidies dedicated to mitigation and post-disaster recovery efforts. “The impact of climate change on African small island states is well documented. It is not only alarming, it is also systemic,” Bourita warned, pointing out that successive reports of the Intergovernmental Panel on Climate Change (IPCC) have clearly established their vulnerability to sea level rise, periodic cyclones, variations in rainfall patterns and soil degradation, not to mention the acidification of the oceans and the increased rise in their temperature. “FAO’s long-term data on the occurrence of natural hazards reveal that half of the island developing states are extremely vulnerable to epidemics, drought and floods,” he said. World Bank reports show the prevalence of undernourishment, which varies between 9 and 29% in 04 of 06 African island states, a situation that is likely to worsen in the face of climate change, he said. “This ‘Topo’ is not there to dramatize, but to mobilize in the face of the emergency. It is also there to encourage proactive, combined and coordinated action by all African countries in the climate negotiations in preparation for COP27,” said Bourita. The 27th Conference of the Parties to the United Nations Framework Convention on Climate Change (COP27) will be held from 06 to 18 November 2022 in Sharm El Sheikh, Egypt.